Artist in Residence at Mondrian Los Angeles By A. Moret

In the early morning hours on August 31, Spencer “MAR” Guilburt stands before an empty canvas.  A seventy five foot bare concrete wall runs along the expanse of the driveway at Mondrian Los Angeles.  Every few minutes the valet turns a tight corner and runs the incline of the broken asphalt, barely missing the wall, just in time to accelerate beyond the rolling metal garage door that creaks on its way and up and down.  MAR moves his step ladder at an angle to avoid touching the oncoming vehicle while keeping a close eye on a set of spray cans.  Meticulously lined beneath the mural, the cans can easily roll down the hill and quite often do. 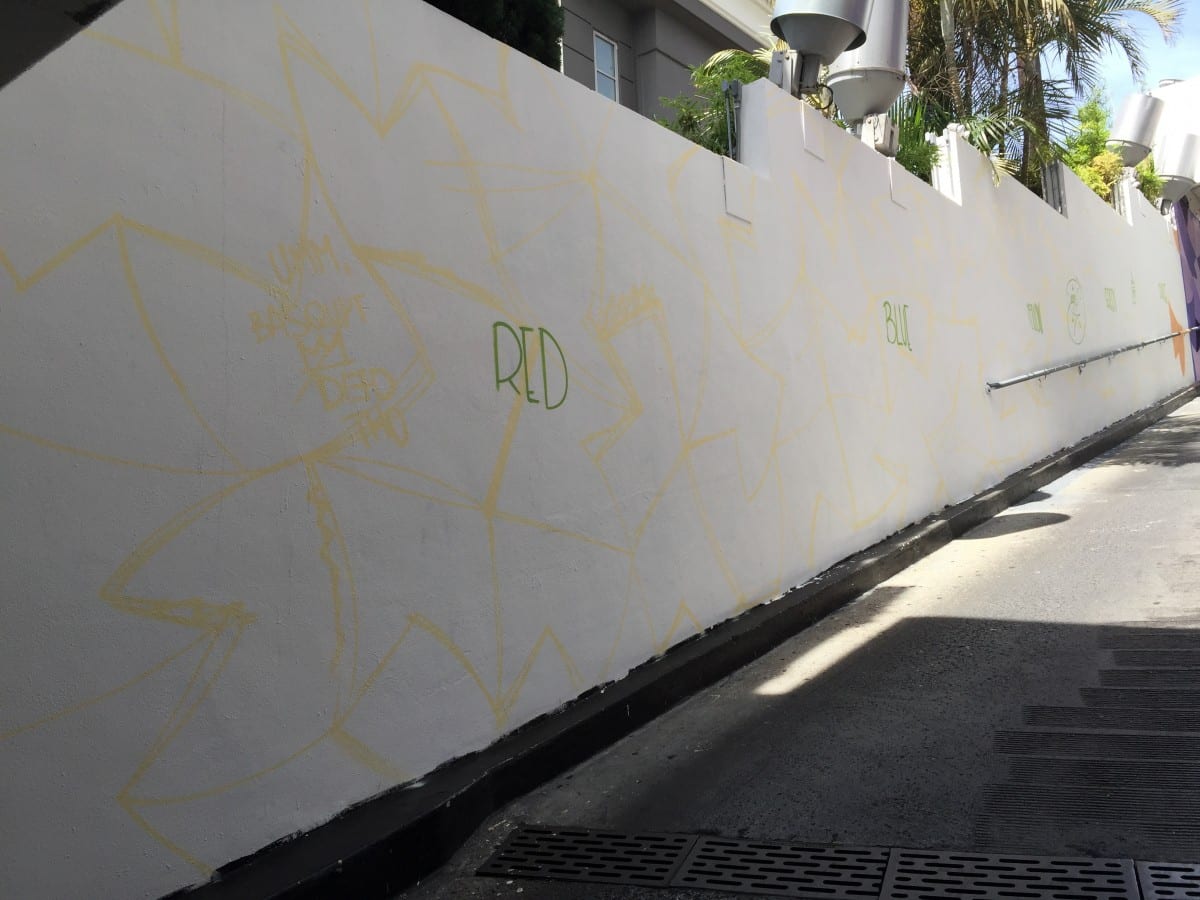 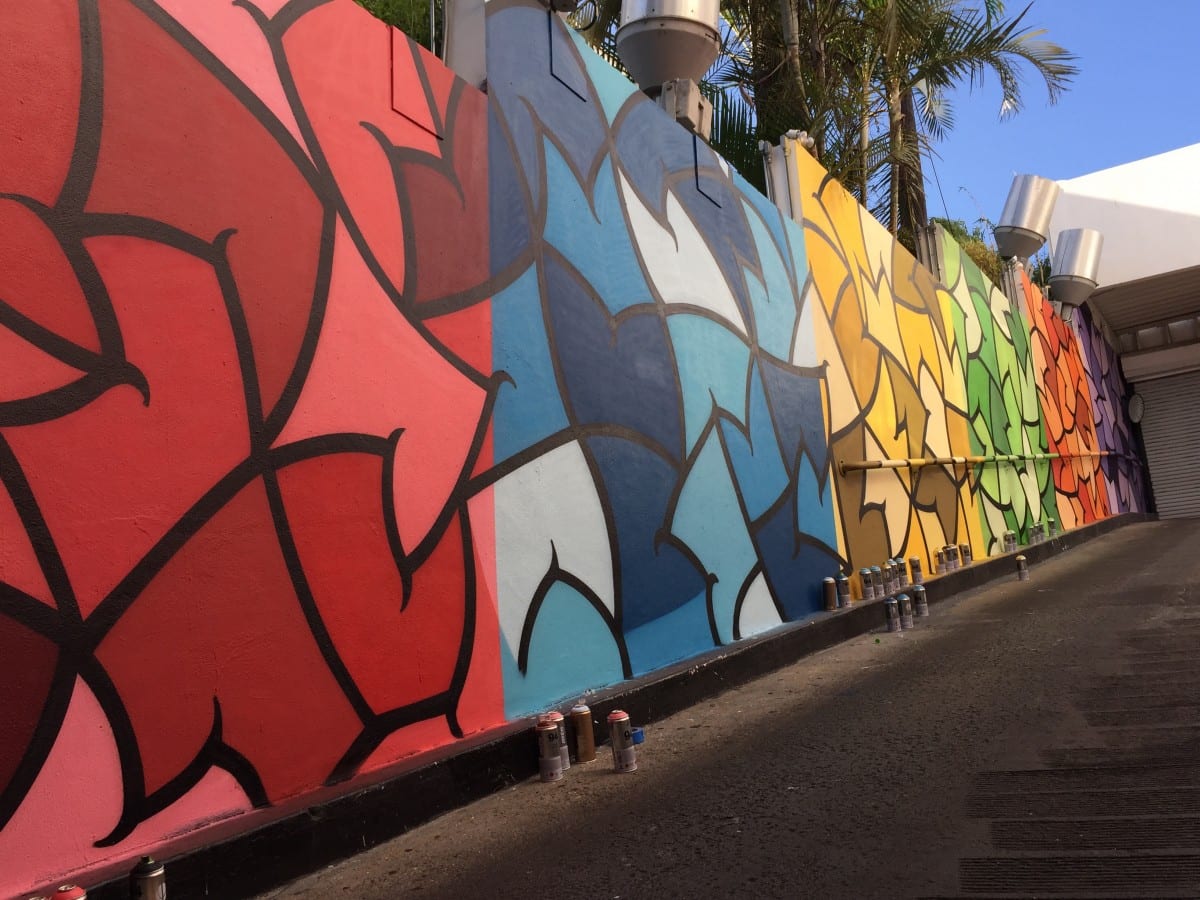 Over the course of several days MAR transforms the stark white fascade into a technicolor wonderland.  Streamers of blue painter’s tape divide the wall into six sections, while faint outlines of spray paint bearing the artist’s signature “fire flower” motif run across the sprawling wall.  Each section is marked by a specific color scheme- red, blue, yellow, green, orange and purple.  Beginning at the furthest end, directly underneath the Skybar sign, MAR infuses the blank wall with vibrant purple tones. 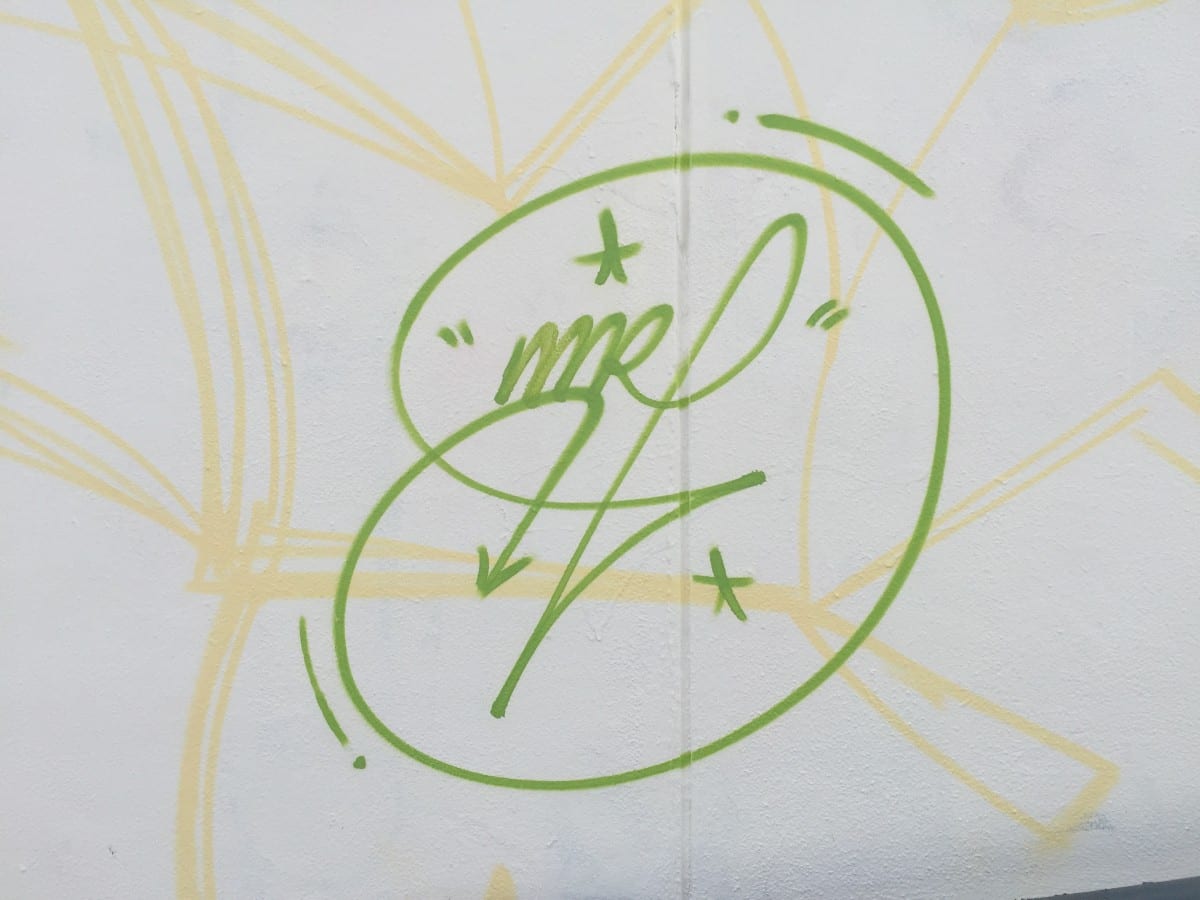 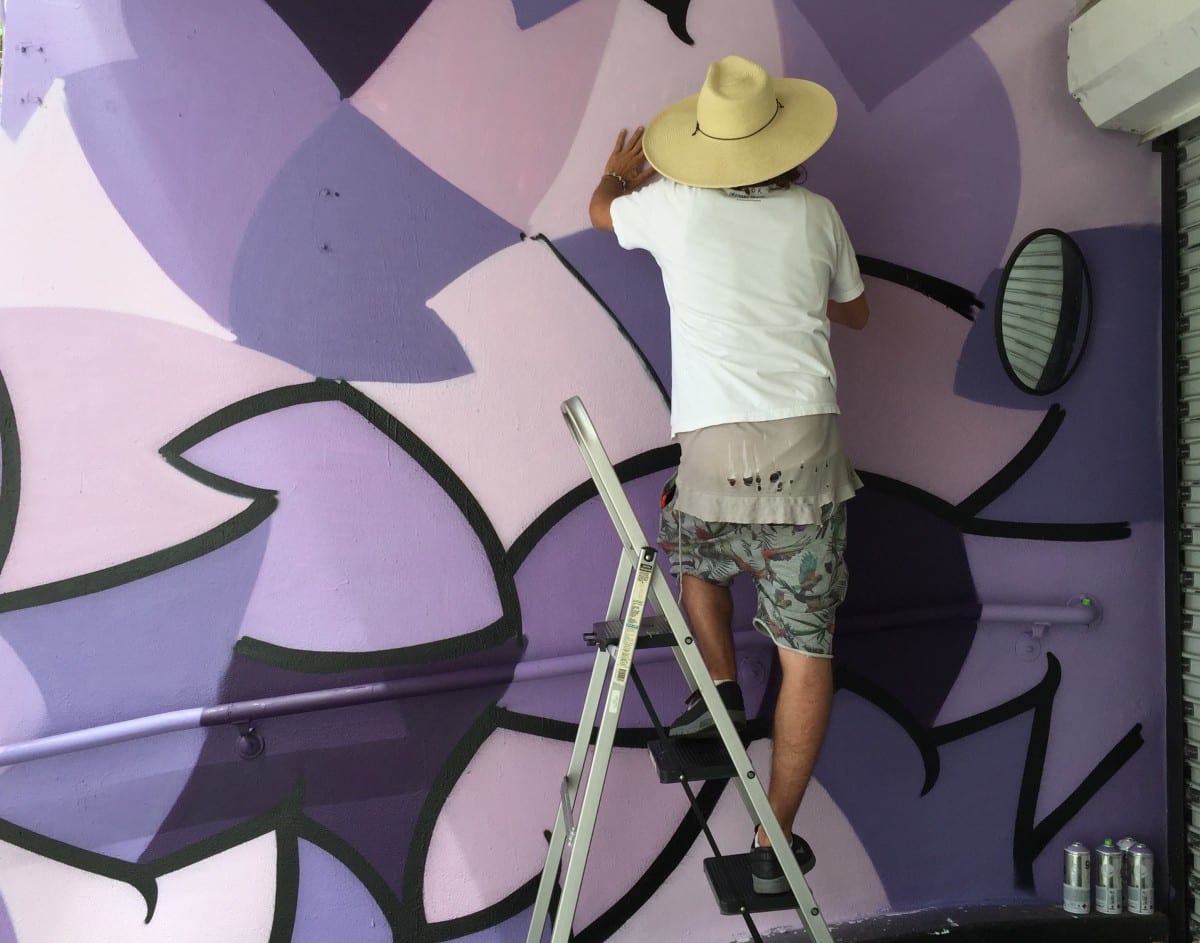 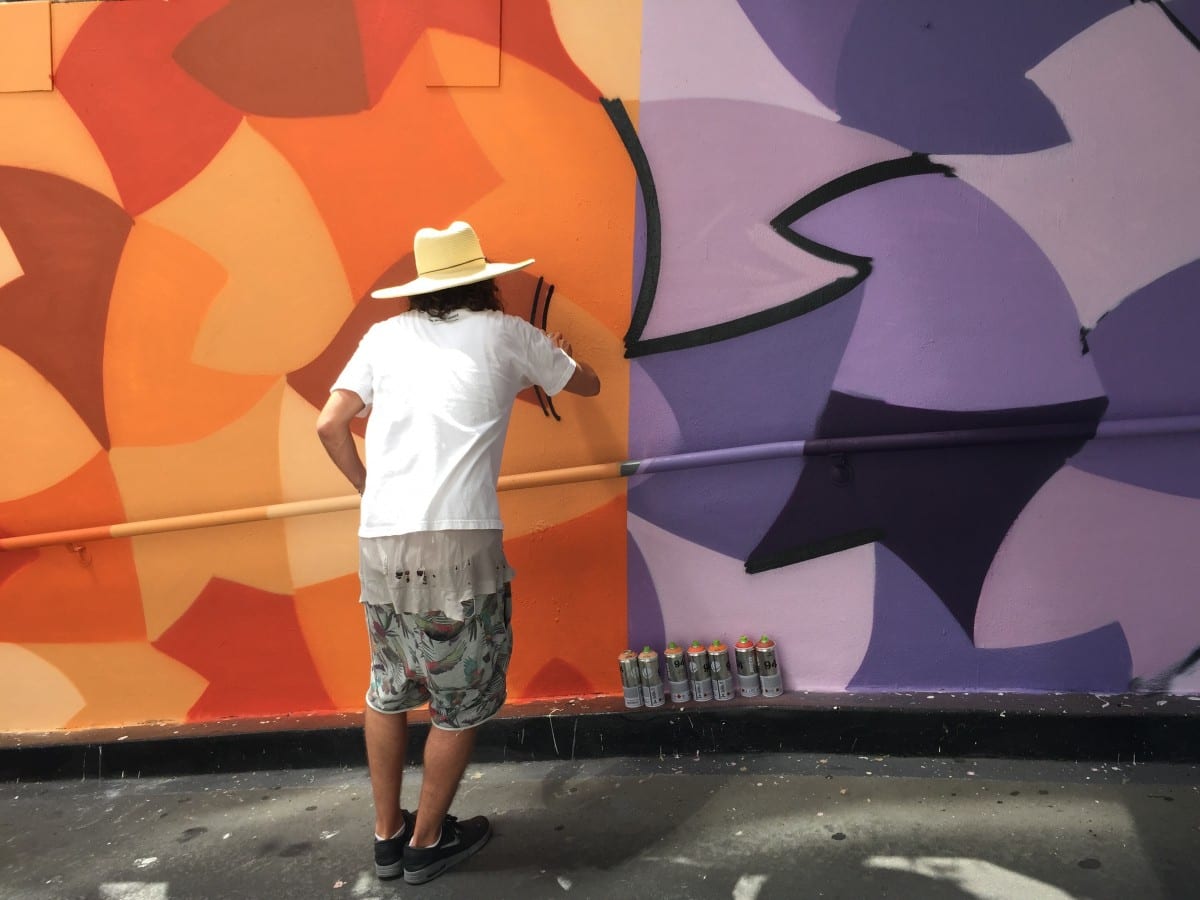 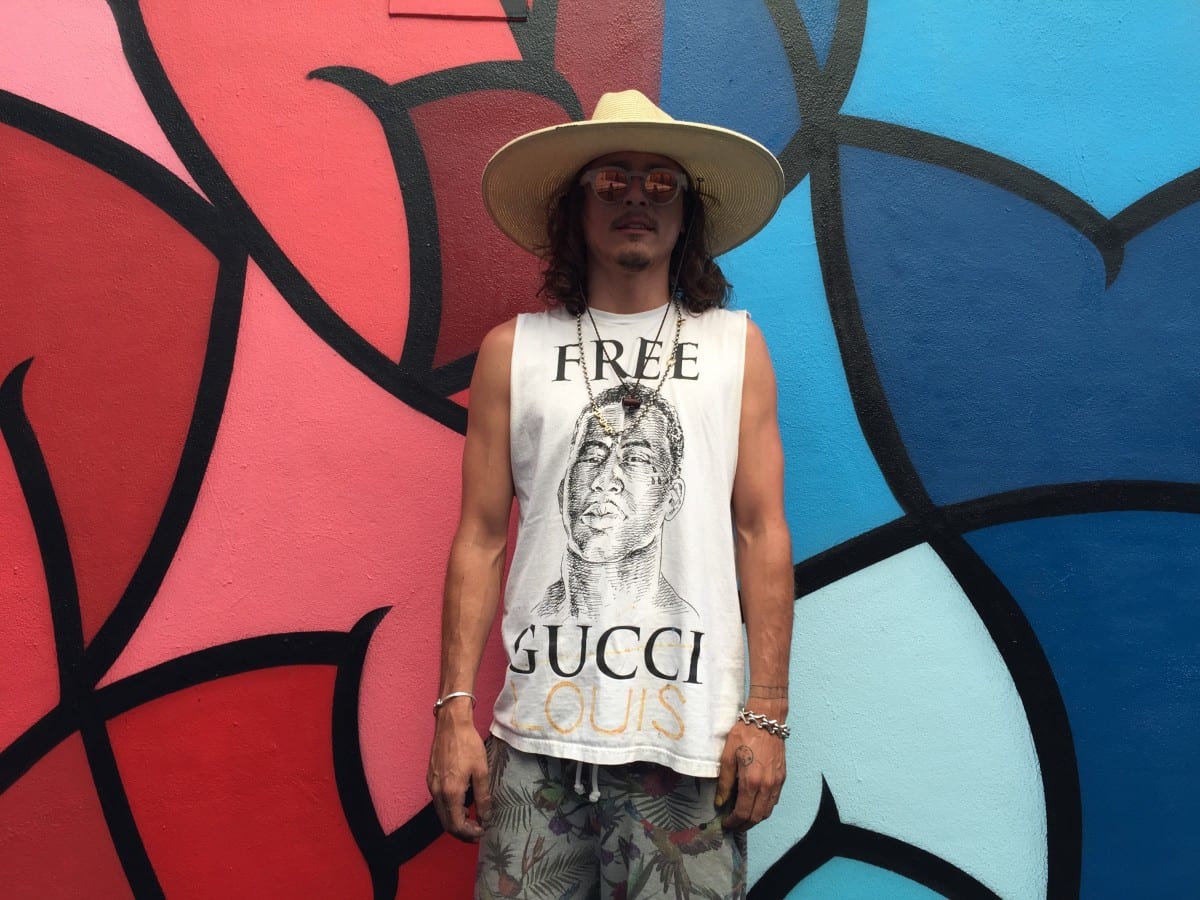 Positioned on the opposite side of MAR’s mural is the work of MADSTEEZ, an arresting large-scale portrait of two women each with four eyes looking at the world through pairs of shattered glasses.  Their eyes appear to travel as if viewed through a fractured kaleikedscope.  Looking up at the mural, MAR explains that “most people don’t know, because his art is so exacting and perfect but, MADTSEEZ can’t see 100% out of both his eyes.  He can only see a mix of shapes and colors out of one of them.”  To engage in a dialogue with MADSTEEZ, MAR’s mural embraces the themes of vision and an unexpected color spectrum.  The artist continues that “the wall has six individual segments, which made it the perfect size for the six colors in the color spectrum.  That’s what I painted- a mixed up, out of order color spectrum.  No imagery.  That is to mimic what the characters in MADSTEEZ’s piece would see if they came to life and looked across that alleyway.”

Inspired by the rich colors of his native Los Angeles, MAR creates an intricate tapestry of form and color using a pattern he calls the “fire flower,” which he organically developed about ten years ago.  He explains that “the shape wasn’t premeditated in anyway, they just sort of appeared.  They allow me to create a feeling or mood with no recognizable imagery.” MAR travels along each portion of the wall holding two to three spray cans at a single time, all while maintain balance on a step ladder and contending with a relentless slope.   Stepping back for a moment, he shakes two cans in the air with the same vigor as a gunman at a Southern draw.  Each color is examined with precision and great attention to detail, yet the fluidity with which MAR works makes the process look effortless. 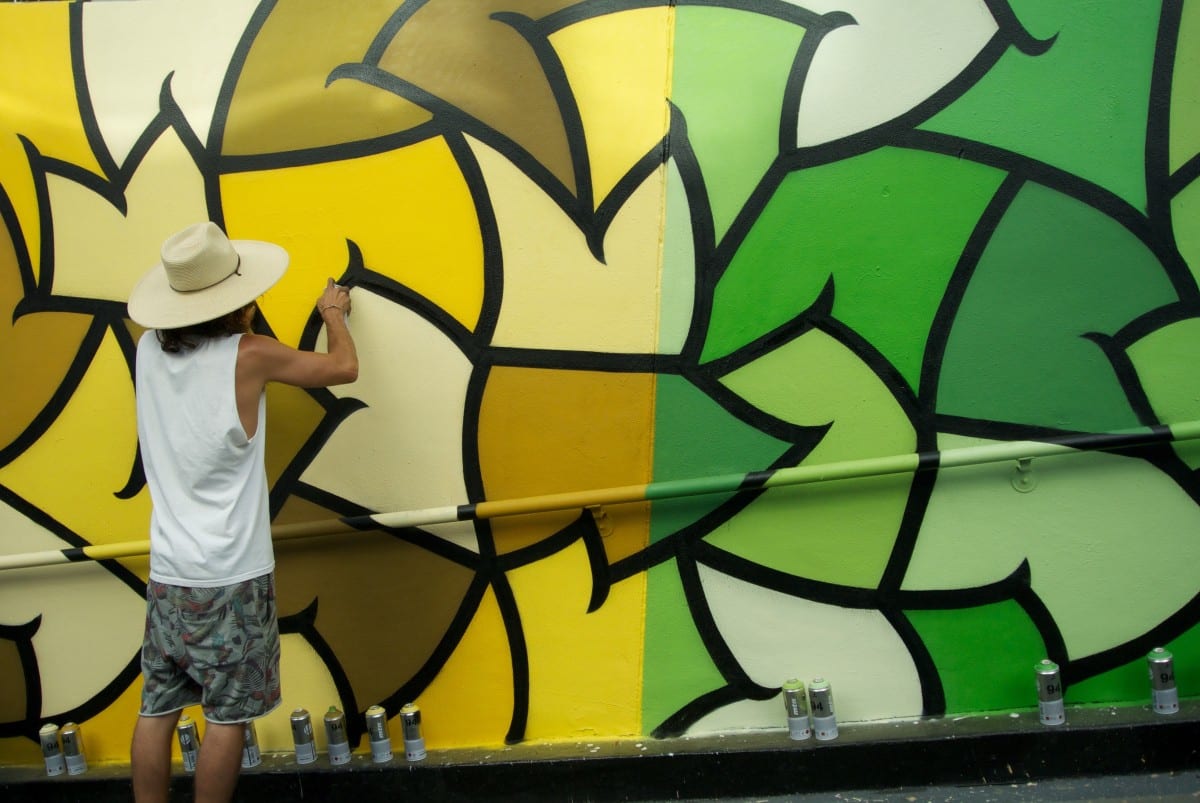 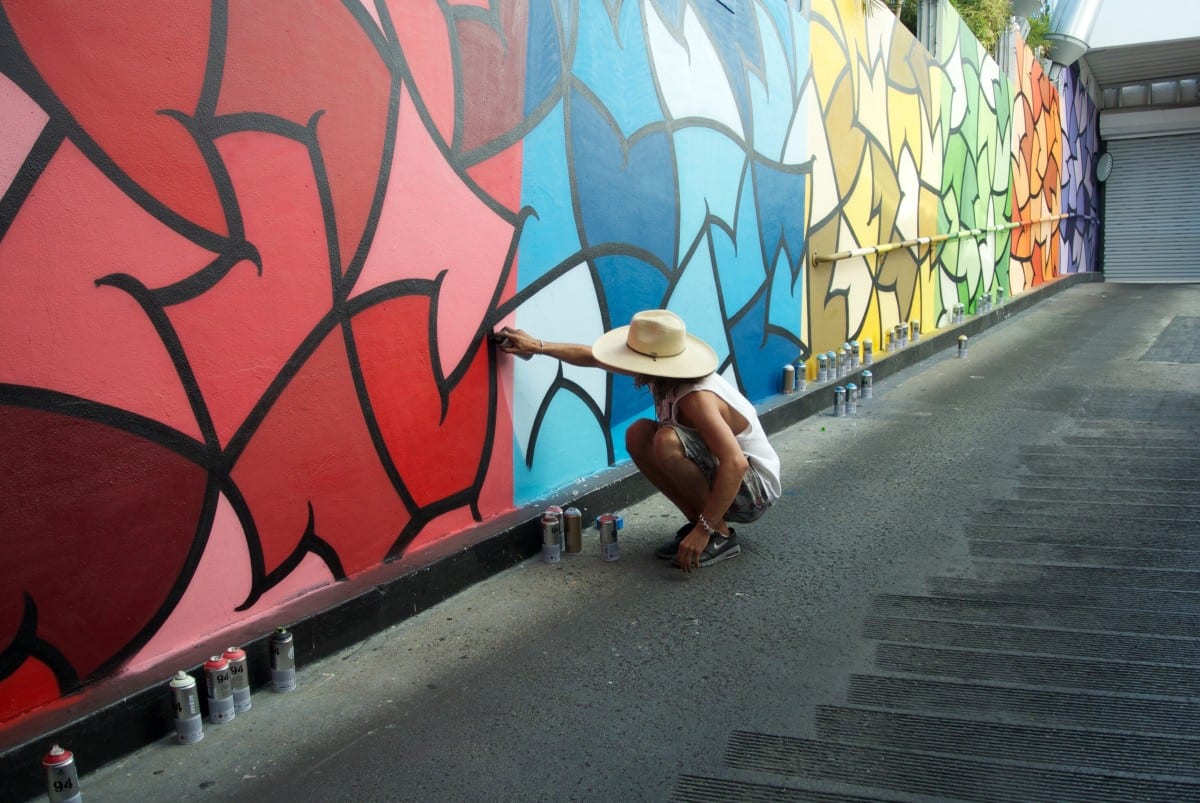 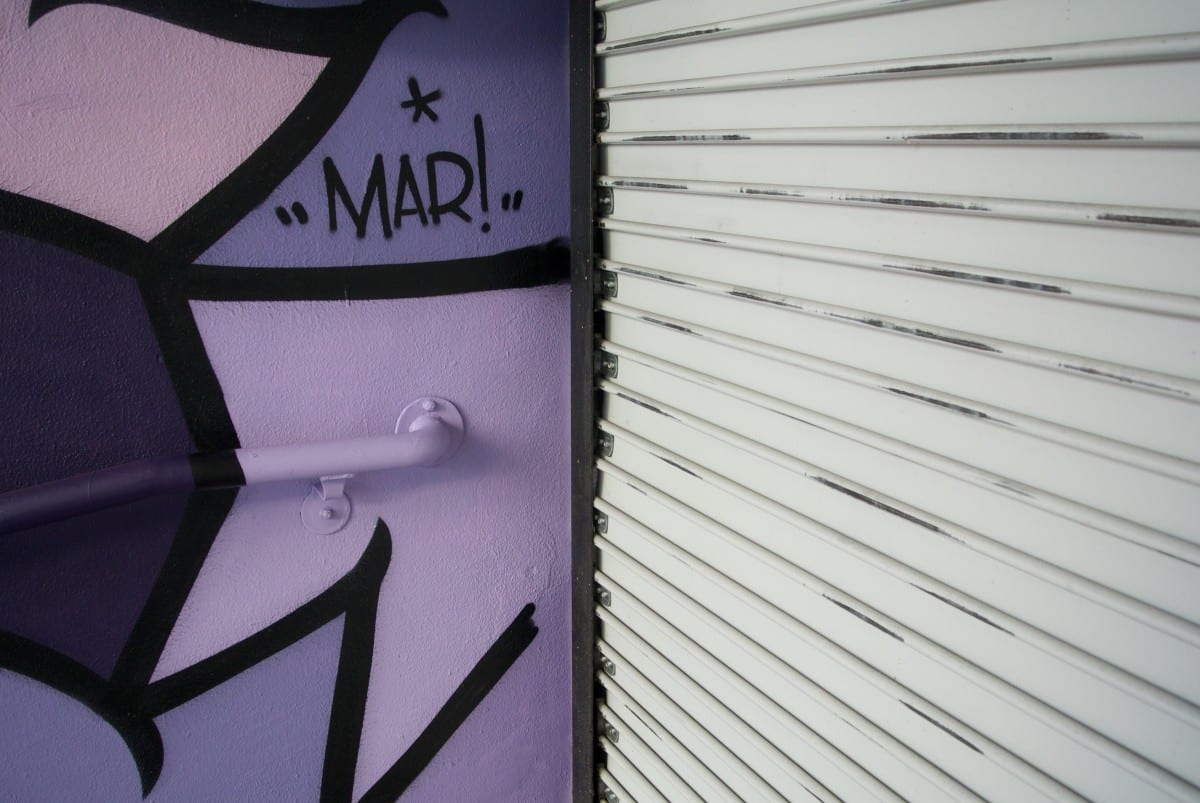 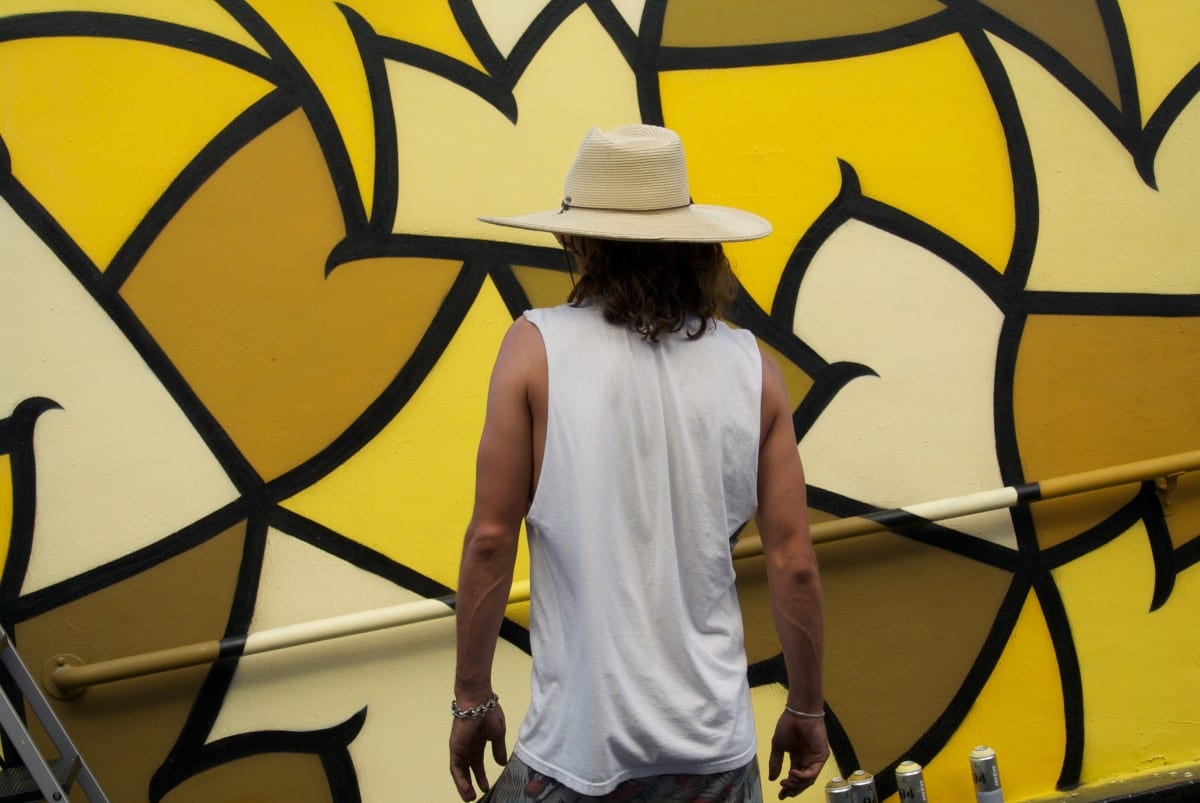 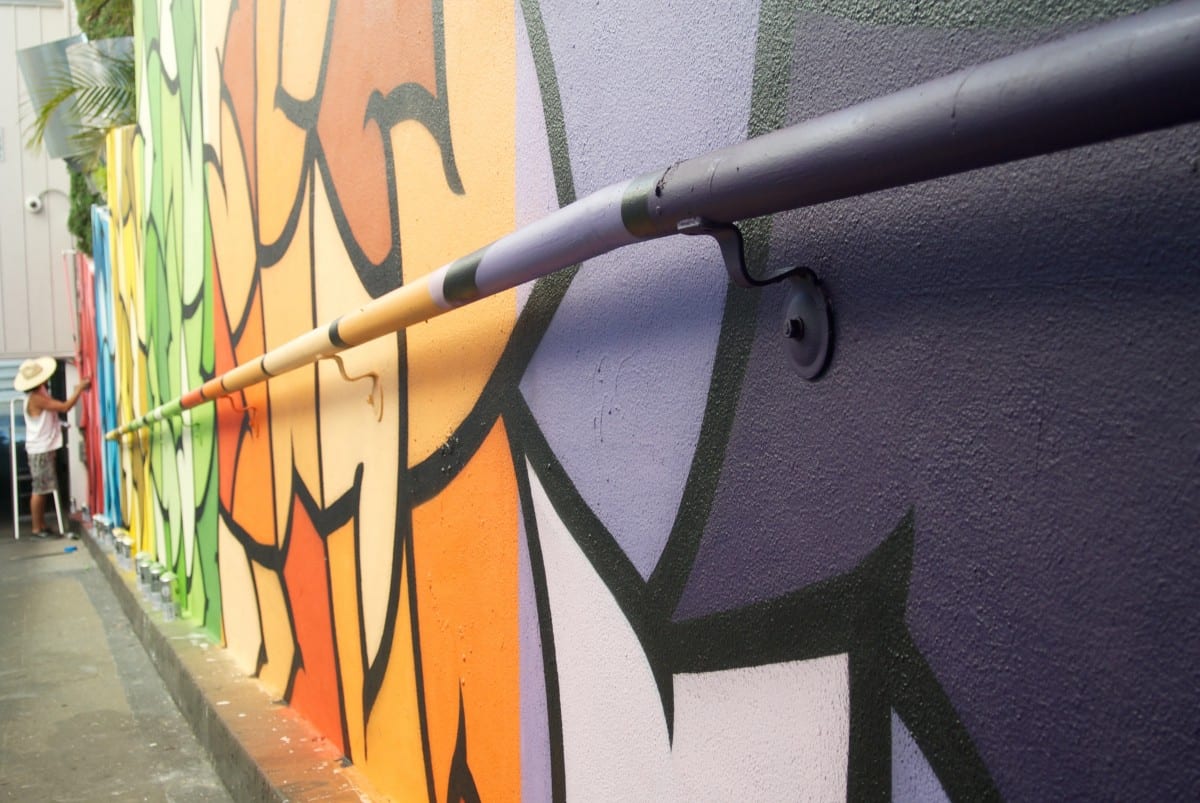 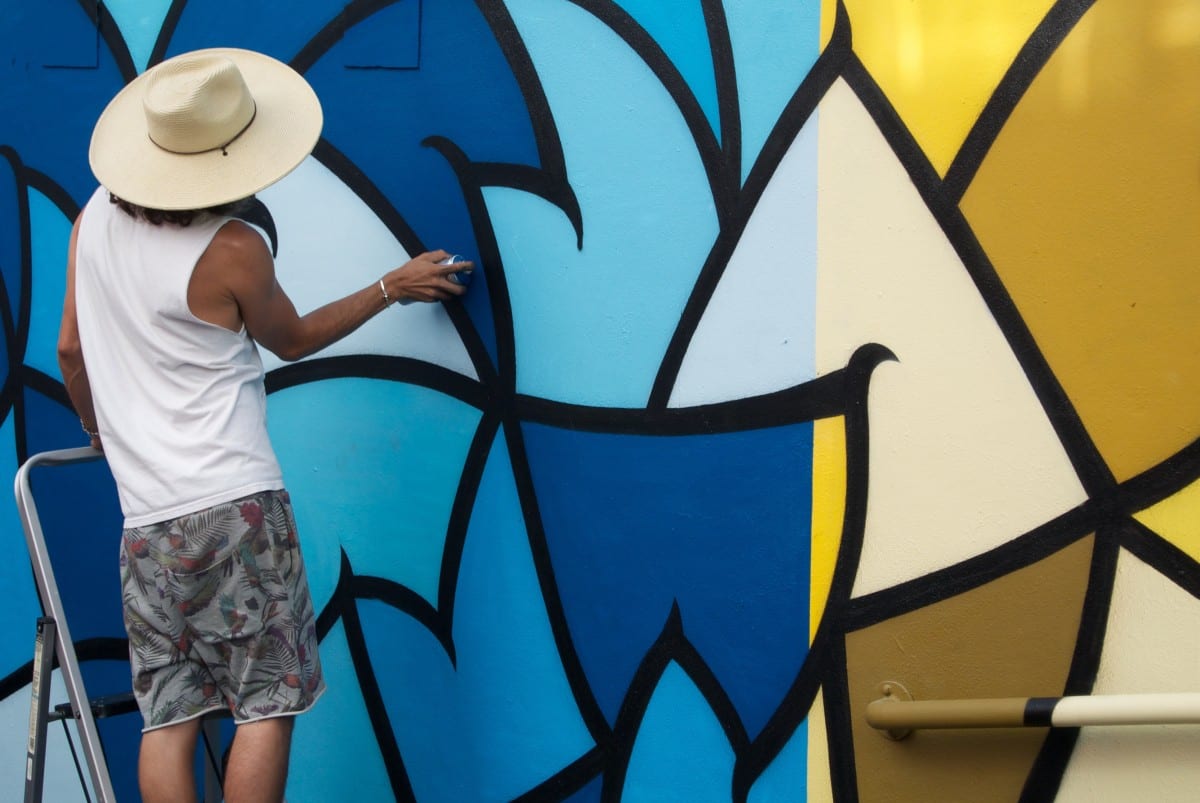 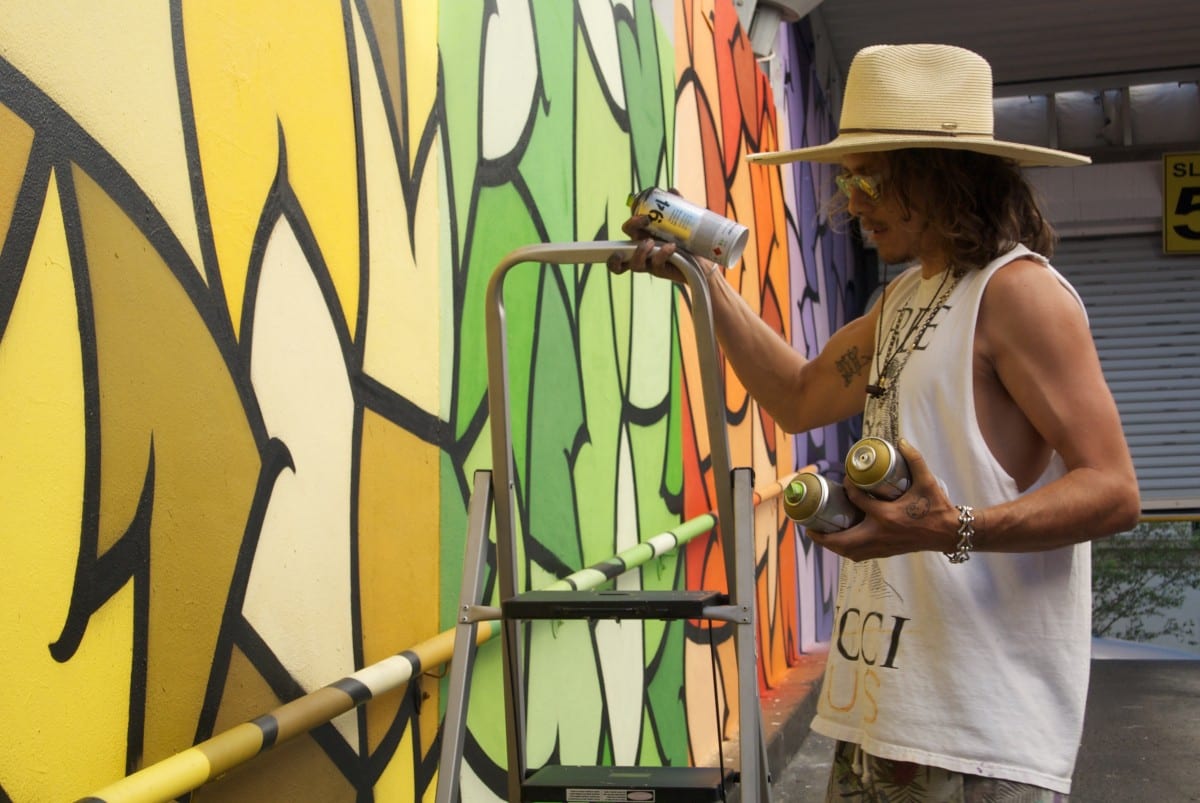 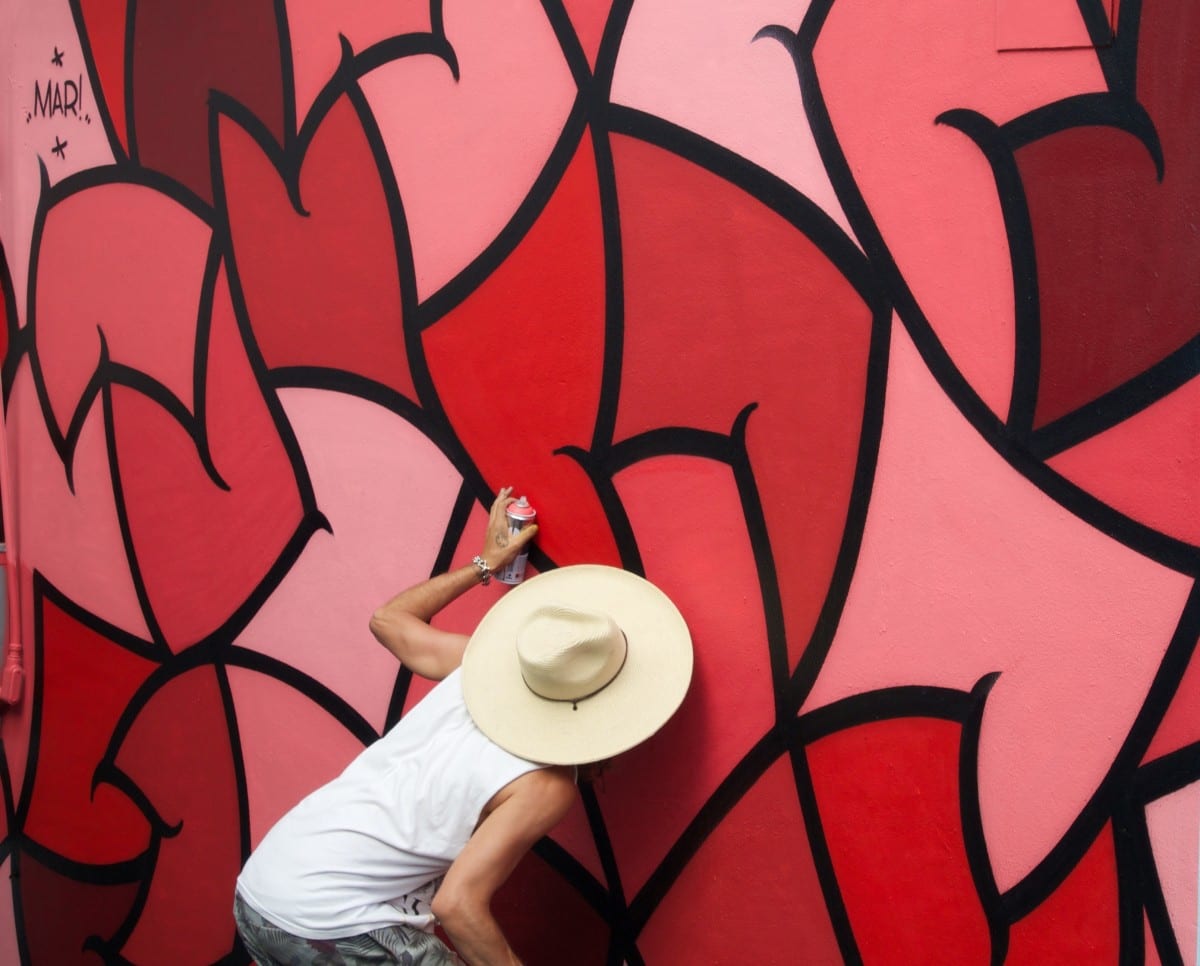 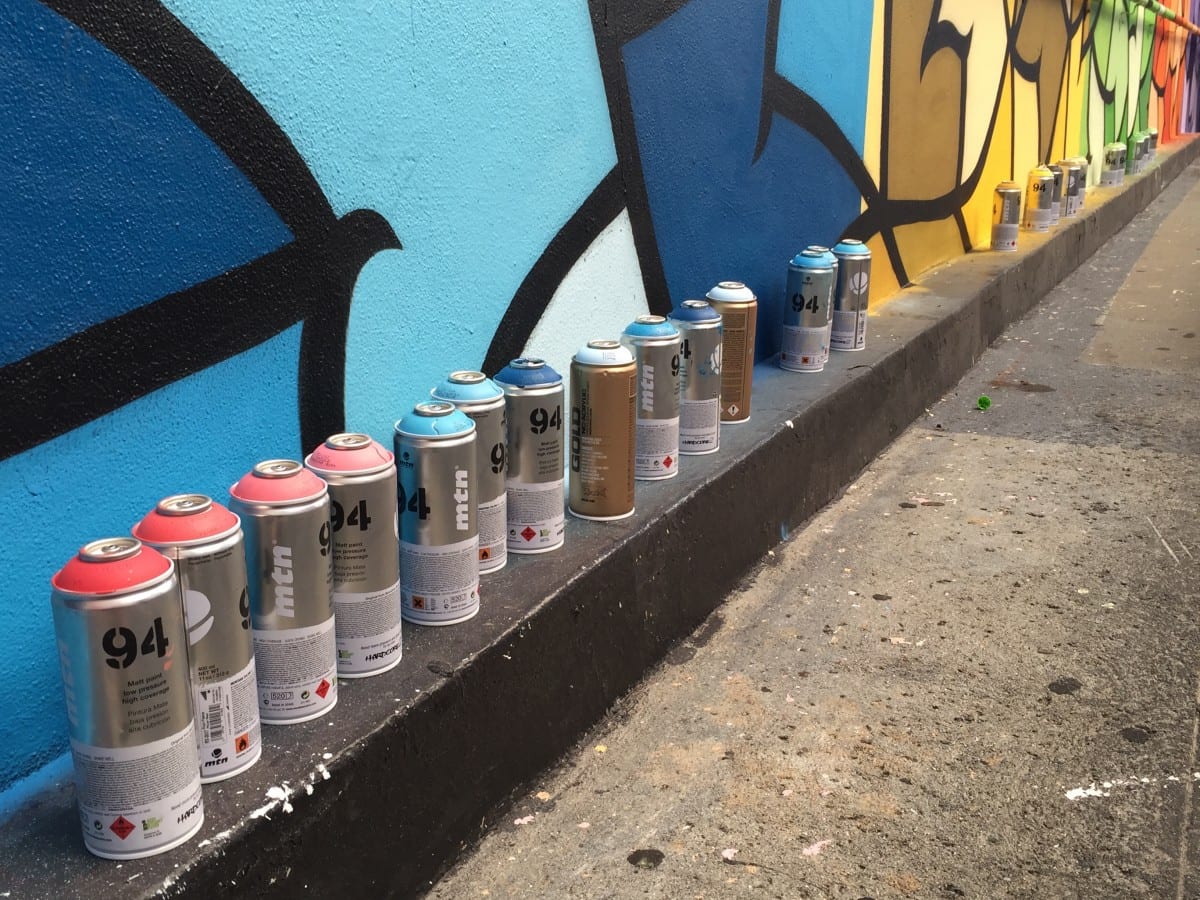 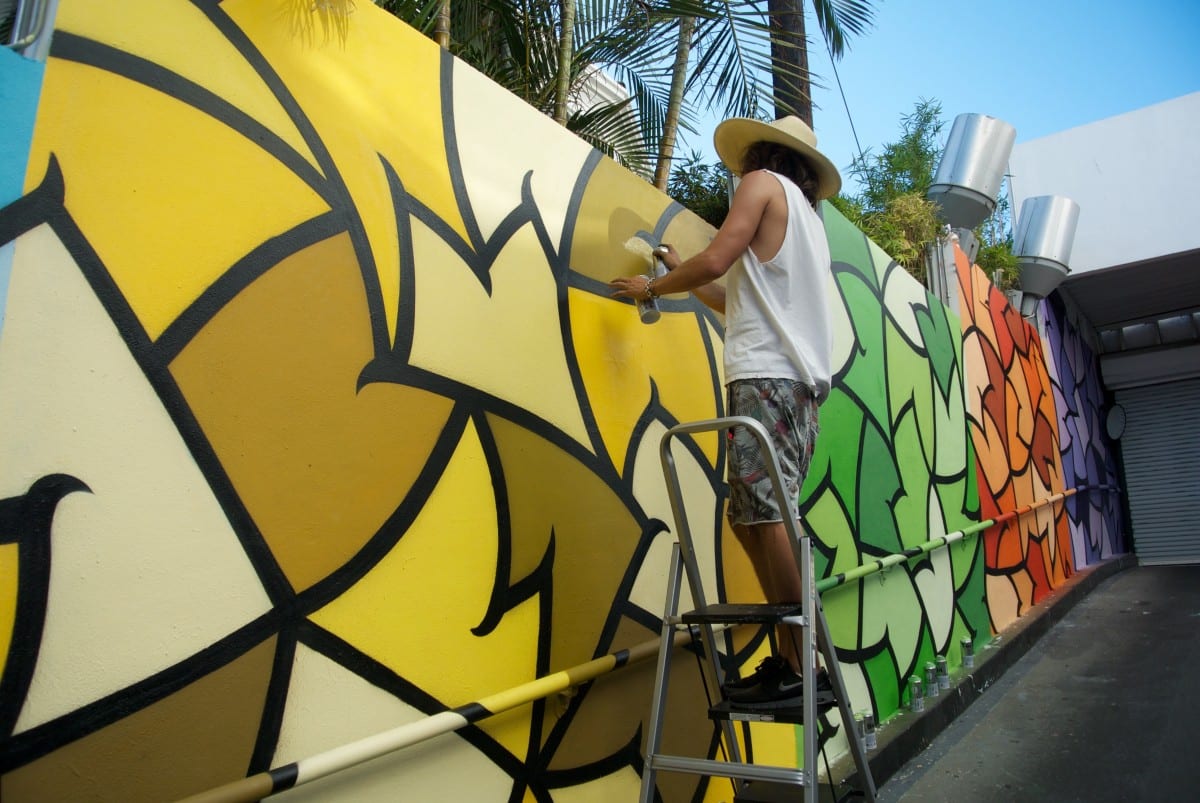 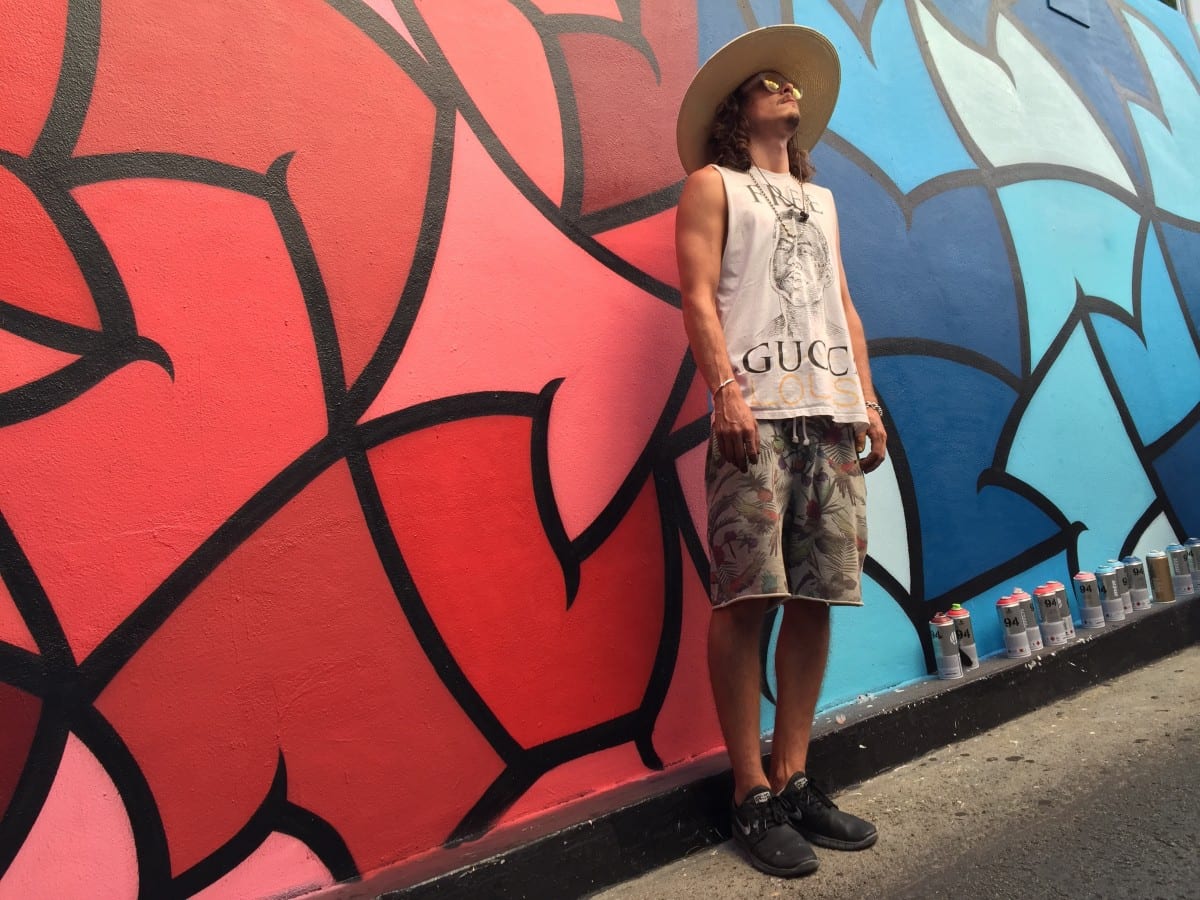 The sun will never set quite the same way at Mondrian Los Angeles again. MAR has left his mark on an inconic Los Angeles destination but morever has reimagined color theory in a wholly unexpected way that is nothing short of marvelous.   MAR will unveil Celebrated Phenomenon of Colors on September 17 at the Skybar, Mondrian Los Angeles.