The ATL Twins stand at the epicenter of fashion, music, street culture. By A. Moret

With a pop- up solo exhibition Tales from Hood, a collection of paintings inspired by their childhood in Chattanooga the duo are now a driving force in the art world.  Brothers Sidney and Thurman Sewell (aka The ATL Twins), are consummate collaborators and are celebrating their second project with fashion house Rochambeau.  Founded in 2007 by Joshua Cooper and Laurence Chandler, Rochambeau stylings are inspired by the grit and edge of punk rock.  Proof7, the printing division of Rochambeau has announced a limited edition print to commemorate the moment where fashion, art and culture meet.  Installation speaks with the ATL Twins, Rochambeau, and Virginie Picot of ATL Twins Management about the collaboration, their entrance into the art scene and ambitions for the road ahead.

What is the design philosophy that drives the Rochambeau aesthetic?

Rochambeau:  From the beginning the idea was to do something different with menswear.  When we launched in 2007 there was this “faux heritage” trend, coming from New York we felt like we could do something to react against what we saw in the market at that time.  Since then we have continued taking risks, it is part of our philosophy and that’s where the brand’s name comes from- a game of chance.

The name “Rochambeau” translates to “rock, paper, scissors” in English, really playful.  What kind of “games” does the brand play with the boundaries of fashion?

Rochambeau:  We never take ourselves too seriously – both Josh and myself do not have formal backgrounds in fashion; Rochambeau developed from a real love of design, fashion and street culture.  We grew up skating and listening to Hip Hop – these have helped shape the brand and allow us to stay above the fray and not become part of the traditional fashion world.

How did the collaboration between Rochambeau and the ATL Twins come to fruition?

ATL Twins:  We have always visited New York for Fashion Week and during one of those trips we met the founders of the Rochambeau brand and clicked.  We ended up closing out the runway at the end of their show at Milk Studios.  Ever since then we have stayed in contact and we always get together when we are in NYC.

To celebrate the opening of Tales from the Hood a limited edition poster was created. What is the story behind it?

ATL Twins:  We originally shot a photo of one of us in front of a painting we were working on and our manager really liked the image.  But we needed both of us in the picture so we set up a session with photographer and friend Diwang Valdez.  He actually ended up shooting the actual show as well.  We love the way it turned out!  We used the logo from the metal band Suicidal Tendencies in the poster because they were a big influence on us growing up and we have always loved the font.  As far as the ski masks over our faces that’s just something we’ve been doing for a while now.  It’s sort of scary and mysterious!

What themes inspired the works in the show?

ATL Twins:  The meaning behind Tales from the Hood is self-explanatory… we grew up in a super gnarly ghetto in Tennessee and witnessed all sorts of disturbing shit.  We never thought anything about it.  It was normal to us.  We have always been artists.  When we were kids we would draw all day.  Drawing was substituted with skateboarding which is art to us, and skateboarding took over our whole lives.  It’s our true passion and we still follow it but we don’t practice it anymore because we work all day and we’ve had a lot of injuries over time, it’s just not the same as it once was.  Skateboarding was magical, we couldn’t think of anything else all day every day for most of our lives, but we got used to the fact that we couldn’t physically do it anymore.  There was a void in our lives for the last couple of years as we started to work for other people.  We got fed up with it.  It was then that we met a character who would forever change our lives, people call him “The Devil,” –  a very creative guy who reached out to us, he wanted us to get involved with one of his films.  When we met him we were blown away by his creativeness and wisdom.  We hang out with him for the next few days, we talked a lot!  It was then that he told us, “you know you guys are artists and you need to create!”  We didn’t know what he meant but he decided to give us homework, yes homework!  He asked us to create a mixed media piece and start writing down all our ideas, something we had never done before.  We were very inspired and motivated by him.

Inspiration also struck the next day when our mother showed up to our condo with a box of our childhood drawings!  We had no idea these even existed let alone that she still have them considering she has moved 30 times.  It was amazing to see our drawings, so inspiring and abnormal.  These weren’t the drawings of an average child.  These drawings were very disturbing and scary.  We immediately knew we had to recreate them but instead of drawing them we decided to paint them on huge canvases.  We had never painted in our lives and really didn’t know how to start that journey.  But when we travelled to NYC, we met with a friend of ours named Harif Guzman and shared our ideas with him.  He was very supportive telling us to follow our dream and even offered to let us exhibit in his space in Soho.

We agreed to shoot for a October/ November release so we went back to Atlanta and with no sleep we just started painting…  We were very exhausted but inspiration kicked in!  We ripped this nicely framed wine art tacky thing off the wall, pulled out some house paint latex, some art and craft acrylics that our mother had bought us the previous week and started painting!  Twelve hours later we felt it was finished and we really haven’t stopped painting since!  As Harif told us the exhibition had been changed to an earlier date we dove in head first not wanting to learn anything from anyone but only from trial and error.  As the exhibition went on without a hitch we have learned a lot.  We figured out we love working with oil paint and acrylic is not really our thing.

What “monsters” can we expect to see in the work?

ATL Twins:  The ones we saw as children.  The monsters that haunted us!  Creepy scungy dudes, kidnappers, child rapists, pedophiles and peeping toms like those people who morphed into creatures of the night.

What do you hope to see them accomplish?

Virginie Picot, ATL Twins Management:  A lot has happened since the pop up show, we have a lot of projects in the making right now fully interlinked to their art, and we are always thinking outside the box of ways we want to distribute and release content.  It all has to be right and also aesthetically in line with what the Twins are about and where they wan to be.  They know exactly where they want to be in one year, three years, five years and in ten years time, which is just what you want to hear when you work with artists.  We have a few exhibitions lined up next year and several exciting collaborations with key fashion filmmakers.  We are having great conversations with some European fashion houses as well as film studios.  The bottom line is their story- what they are about now and in the future, and where they come from and where they are going.  With their art and creativity to fully carry it all, the ATL Twins are the epitome of pop culture. 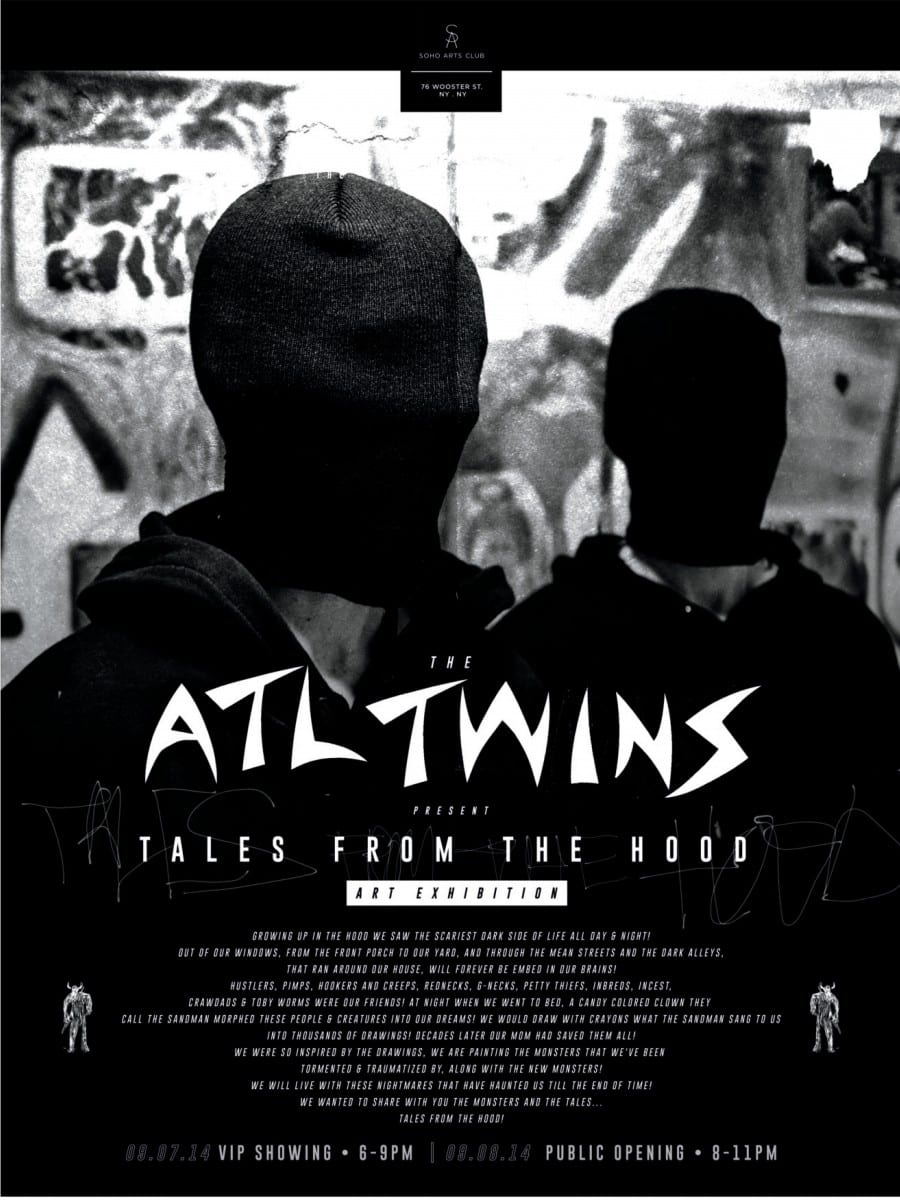 Claim your own piece of Tales from the Hood and purchase a limited edition poster printed by Proof7/Rochambeau and photographed by Diwang Valdez.  Only 100 editions are available and each poster includes an original drawing signed by Sidney and Thurman Sewell.