Writer and photographer Christopher Bucklow’s series Guests features luminous, glowing figures.  He tells Installation about his innovative pinhole technique and the mythos and philosophy behind his work.

The Guests are made of light.  What you see in these photographs is a blue sky with thousands of suns- a sky where all the suns swarm together to form a human constellation.  The images from this series are made with a pinhole camera.  Such a camera would usually have only one pinhole aperture for its lens, but the camera I use is a homemade giant, the size of a large packing crate, which has more than 25,000 pinholes.  By using the shadow-silhouette of my models, I arrange the apertures so that the solar images fall into the shape of the figure, and each sun looks like a glowing cell.

25,000 days is roughly seventy years- a biblical lifespan of three score years and ten. In each Guest therefore there are a lifetime of suns.  These figures, then, are of the sky.  The resonance is Egyptian.  “Of the sky” is how the immortal new-dawning soul is described in the Pyramid Texts.  It is heard in the powerful Philip Glass opera Akhnaten.

The act of inventing a photographic technique and of creating a series such as Guests springs from many sources.  Much of the meaning- emotional and psychological- that is made by such acts often remains unconscious.  However, I recall that when the first figures were made, I had one conscious overriding need: I wanted to portray, to celebrate an aspect of the human entity that I had begun to see in a new light.  This seeing was a revelation.

I imagine that the human individual can be seen as two creatures in symbiosis.  My names for that pair are Host and Guest.  At some point in the past million years, the phenomenon I call the Guest started to form.  Probably at around the time that language and memory began to develop in importance, we began to evolve brains with fewer hard-wired behavioral instructions, but with a greater capacity to learn and store information.  The advantage this conferred was flexibility, and one can readily see that the trait would be selected for, and that it would grow incrementally.

However, there is another interesting possibility that it may not have been incremental, but rather involved genetic changes that made a decisive difference over a relatively short period.  These changes were part of a phenomenon called neoteny.  Neoteny is easiest to explain in a non-human example: the Axolotl.  The Axolotl is a salamander that is stuck in its the juvenile stage and never undergoes metamorphosis.  It retains its gills, stays aquatic, and becomes sexually mature in its larval stage, breeding without changing into the adult form.  It is as if tadpoles remained forever tadpoles, begetting more tadpoles without ever becoming frogs.

It has been proposed that humans are neotenous.  We have the classic features: we have little body hair, out-turned lips, large eyes, high foreheads and brains that are disproportionately large in relation to the size of our bodies.  Psychologically, we have a prolonged childhood and we retain juvenile cognitive abilities throughout life: the continued ability to learn, perpetual curiosity, and an attraction to neotenous features in our choice of sexual partners.

Axolotls treated with hormones can turn into adult salamanders.  They lose their gills and live on land.  I wonder what we would become of we us if we changed out of these, our childish clothes? The psychological traits of neoteny interest me most.  Our ability to learn throughout adult life must be the reason for the atrophy of the hardwired behavioral codes in our brains.  Without instinctively supplied behavior, we are poorly equipped for life, but what we carry instead is a space that can be filled with the information we need to function. To be sure, this space is not empty or blank.  It is marked with propensities and facilities that shape our learning.

What fills that space within the individual is what I call the Guest.  However, the Guest also exists outside of us; it precedes us as individuals and it is from outside that it flows to fill our inner space.  It is as if we humans have evolved an external organ.  This organ is culture.  It is an organ as vital as any internal organ.  In remote times, the external organ only existed in the heads of those adults of our group.  Then, about five thousand years ago, it began to exist in writing, first on walls, tablets and scrolls, then in books and now principally on the web (where it has returned to tablets.)  At our beginning, it behaves for us like a placenta; it nourishes us, and we learn what we need to know from it to live.  Then as we become adults, we build into the placenta ourselves, modifying it for the following generations.  At first the umbilical cord that connects us to the external organ is aural, and has, at either end, a mouth and an ear.  Then the cord evolved to include at its ends, an eye and the written word.

For me, at the time I invented the Guest series, I saw this external, cultural organ almost as a living creature; evolving, morphing, as it travelled through time, it linked inextricably with us, simultaneously within and without us, but perceivable as a beautiful phenomenon of the world in itself.

This external organ, the Guest outside the individual, is dispersed by its very nature, and was, even from earliest times, spread out within groups.  Despite its dispersed nature, it is to me somehow, a single entity, not static, always forming and un-forming.  However, by its very nature, it appears that it is immaterial, of the realm of the symbol, of the domain of information and meaning.

Meaning must be a pattern between things, at its most fundamental level, between neurons.  But is pattern itself embodied? Is it not formed entirely of relationship, dependent on the material world but not of it, existing in a knot of dependence and independence? In some way this symbolic realm is another universe, one in tandem with this material universe but not of the same stuff.  And today, the main portal to that universe is the device you hold in your hands.

What I call the Guest has had other names.  The Jesuit philosopher- paleontologist Pierre Teilhard de Chardin called it the noosphere (pronounced know-osphere); he described it as a ‘layer’ surrounding the earth.  Following a Platonic line, William Blake called it Eternity, from which the souls descend into their earthly bodies woven by his version of the Fates.  The same theme is behind the Eden story of the Judeo-Christian mythic system, for when Adam and Eve are given “coats of skins,” it is not to cover up their nakedness, but to clothe their celestial, non-material beings in flesh.  They download into meat.  Christ himself was an early downloader, but only for thirty-three years.  The theme lends itself well to science fiction and the nature of the Guest might be related in certain ways to the ‘upload’ state from which the downloaders descend.  The brilliant and moving novella Oceanic by Greg Egan tells the story of people descended from a culture that had existed in the uploaded state for millions of years and who later came down into flesh; that downloading event is lost in the mists of time and may even be mythical. 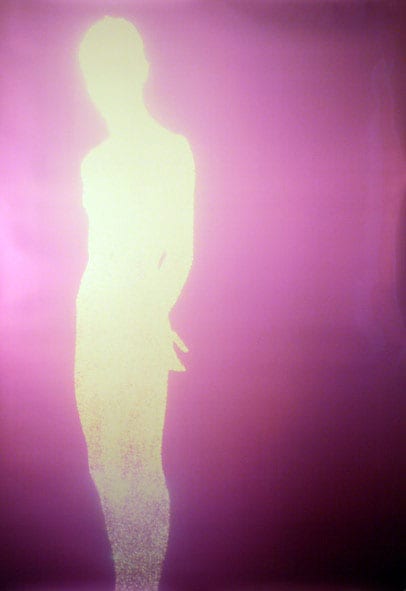 My own Guests have been descending for some years now.  Their descent and subsequent story is described in my paintings.  I have found that the act of making the Guest series is my building of a cast of characters.  It is ongoing, but that cast now suggests a play.  The play is improvised and the characters write their own story– at least that is how it feels to me: the dramatist, the medium.  This process is like the Italian Commedia dell’Arte tradition, with familiar characters coming on stage to invent their own plot.  Perhaps it can also be likened to séance: I paint a staircase or an empty room, or a desert, or an ocean and then await the ‘knock’ as a Guest character wants to come into that space.  When several have assembled, taking on their earthly bodies, I wait to find out what they will do.  They act out their destines of love or war.  The result is data, data from the unconscious; data from the realm of the Guest; information reports from that other place.

All images Tetrarchs from the Guest series, 40″x 60″, Courtesy of Danzinger Gallery NY and the artist