Reflections on 100 Walkers with Richard Kraft

Installation Magazine's Photo Pop Up for 100 Walkers By A. Moret

How did you work with the 100 volunteers to establish the parameters of the performance? (How many meetings did you have, how did you get the word about recruiting volunteers?)

I began recruiting volunteers by asking friends and acquaintances if they would like to participate and whether they knew any people who might be interested. Word of mouth became very important and I received a number of inquiries from people I didn’t previously know. I also made a big recruiting effort at Orange Coast College where I teach. I was very touched by the number of students and colleagues who volunteered as performers as well as in roles as photographers, videographers and support crew.  Anyone who signed up committed to attending an orientation session the week before the performance as well as, of course, arriving punctually on the day of the performance. As my list of volunteers grew I stayed in touch via email, letting them know when I had posted new material about the piece on the website (www.onehundredwalkers.com) and also the dates of planned orientation sessions. I held five of these sessions, three in West Hollywood, one in Orange County and the last at my studio (mainly for people who had flown in from out of town, a surprisingly large number) the night before the performance. 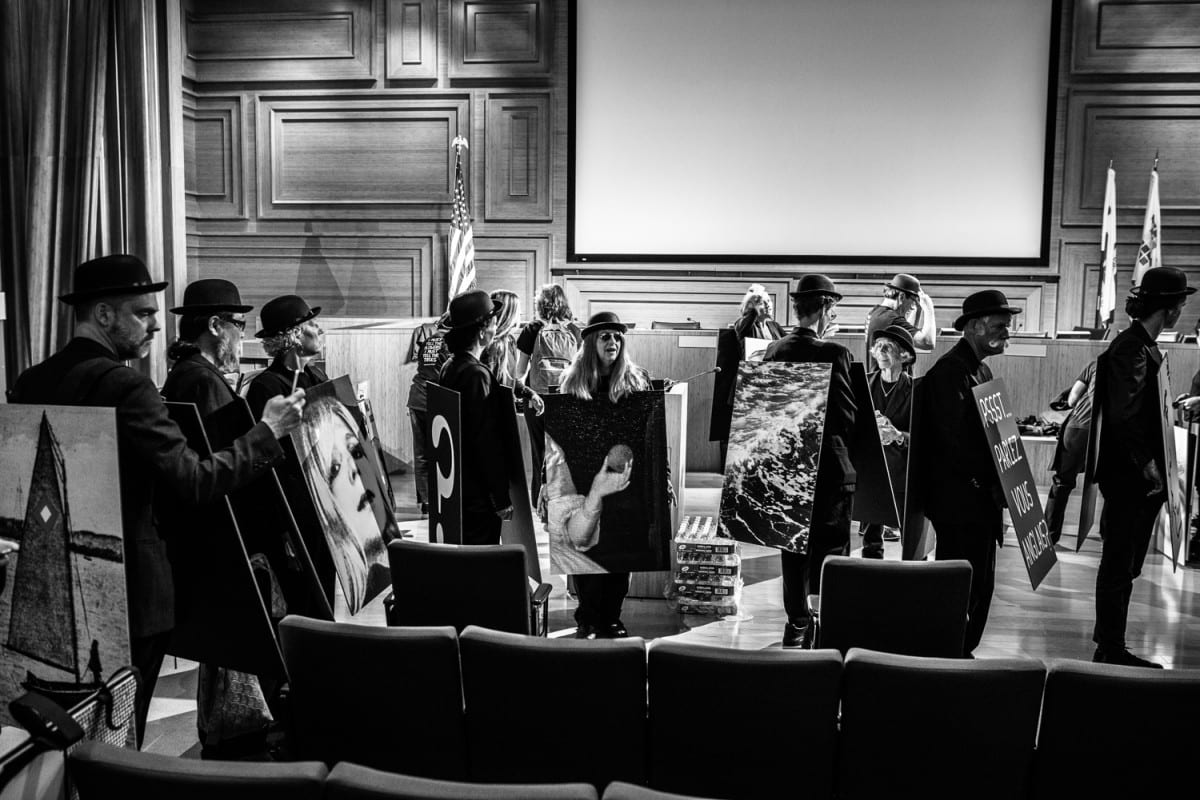 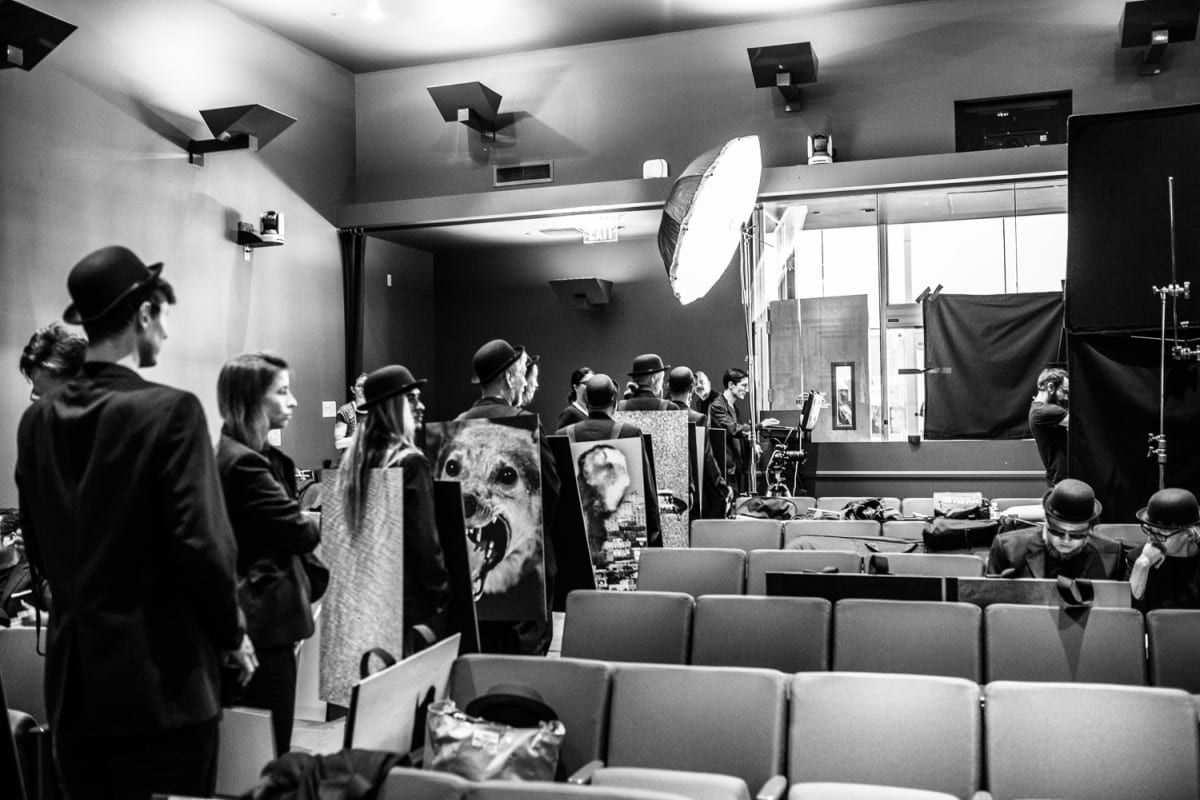 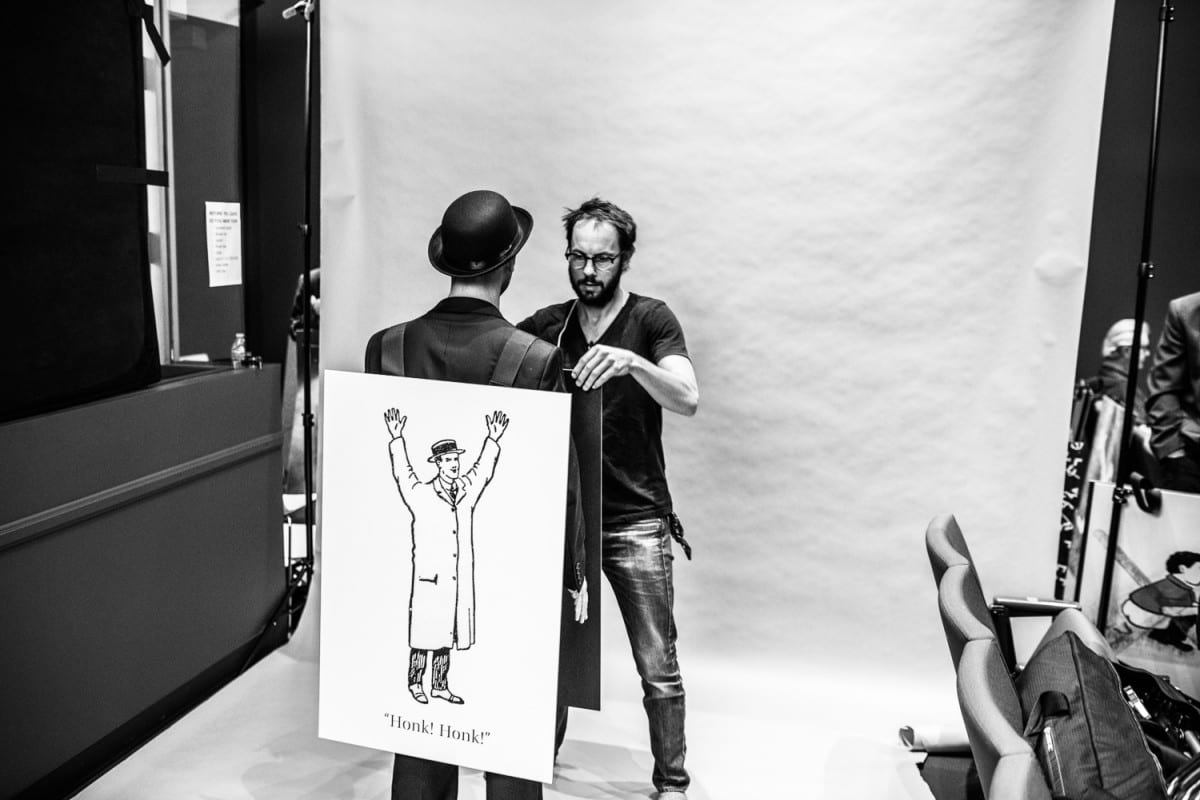 What instructions did they agree to follow once the they began their route?

Each performer was given a unique booklet (it had their particular sandwich board images on the front and back pages) with details about how the performance would begin, a map with their specific route as well as instructions as to what to wear, how to carry themselves during the performance, how to interact with the public and how to end the piece. All walkers were given a large supply of “business cards” to hand out if approached by the public and they were asked to stay silent for the duration of the performance. 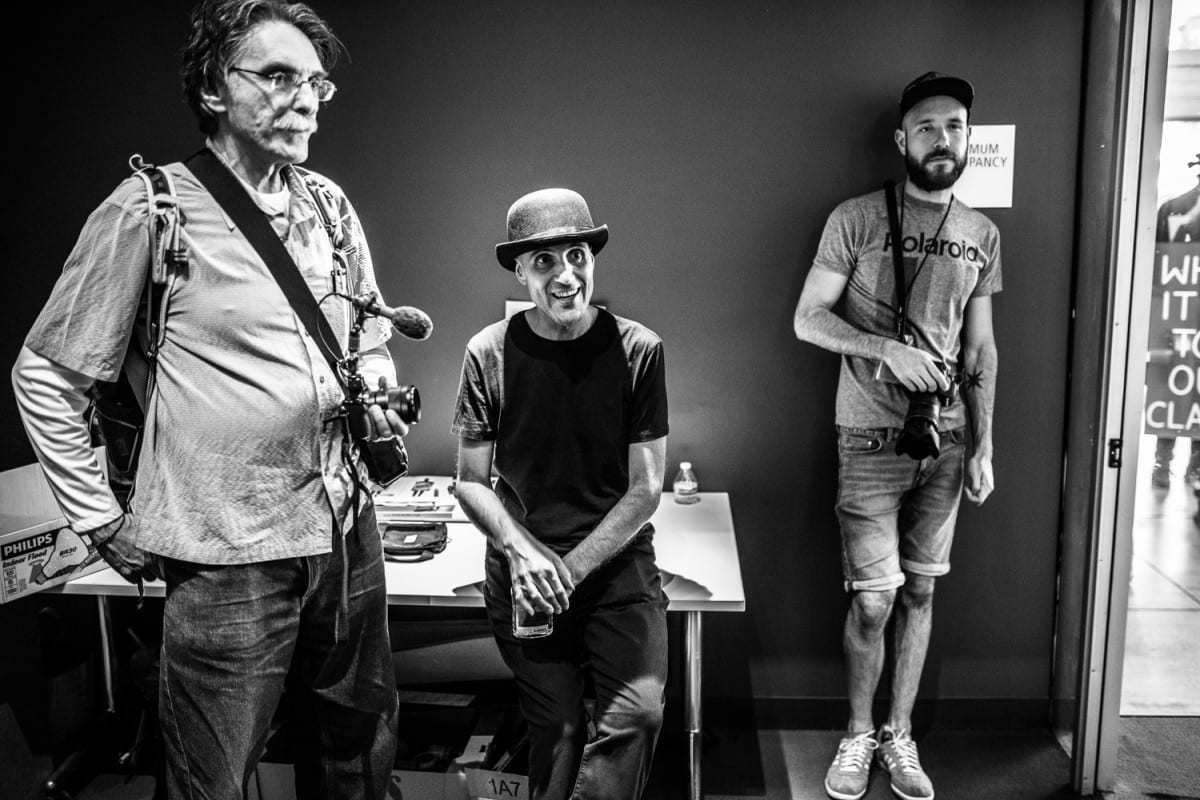 Each walker was given a set of cards.  What did the cards look like and how did they relate to the sandwich boards?

There were nine different cards in total. They all had the same name (A. Pippin) but each had a different occupation on the front and an image on the back. The occupations ranged from the believable (Priest) to the absurd (Prune Picker) and there was no logical or rational relationship between the text on the front and the image on the back. 100 Walkers was intended to subvert everyday expectations, in particular those relating to the ways meaning is conveyed (and thus expected) through advertising and other images. Much of what we encounter in the world is designed to deliver very specific messages in the most direct way possible (there is little, if any, room for imagination). I’m interested in upending this, offering instead images and texts that are open to and invite individual interpretations and reverie. The cards are simply an extension of this. Typically, walkers are approached and asked to explain what they are doing. In remaining silent (always politely) and handing out a card that explains nothing, the passerby is again faced with arriving at their own answers. 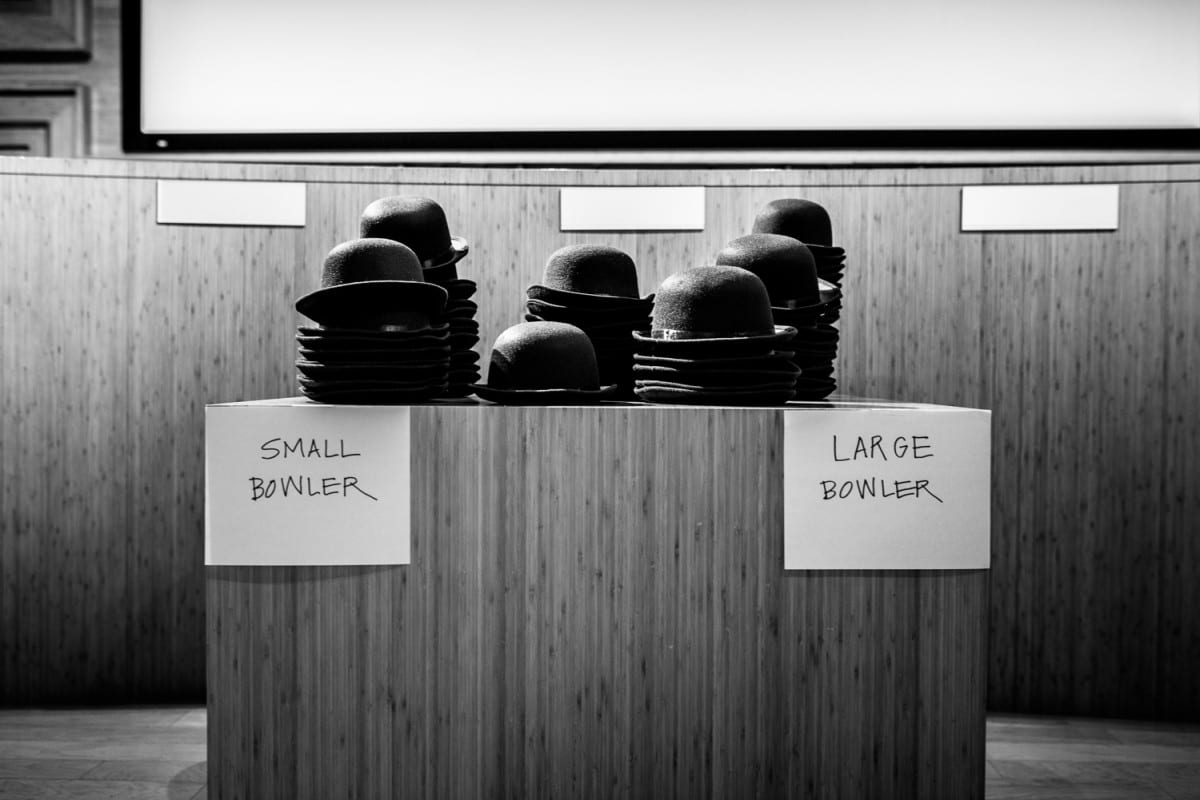 Each walker also wore a bowler hat and a jacket.  Where did you find all of those hats?

Many walkers had their own suits and jackets and Out of the Closet very kindly supported the project by loaning me fifty jackets. The bowler hats were purchased. Fortunately, when you buy that many hats you get a quantity discount.

Although there were 100 participants, it seemed that each walker had a clear understanding of where they were supposed to be at all times.  After seeing images and footage of the performance, some of the walkers didn’t adhere to your guidelines (stance, how to walk with the board, following their route, etc).  What would you change in your preparation for the next performance?

For the most part the walkers were incredibly disciplined and conscientious about following the instructions I had given them. I was very moved by this, particularly given that for the vast majority of them this was a completely new experience. I have learned though that I can’t assume that people can read my mind, even if they are experienced performers. I have to take care to be very clear about each aspect of the performance and every eventuality that I can anticipate ahead of time. 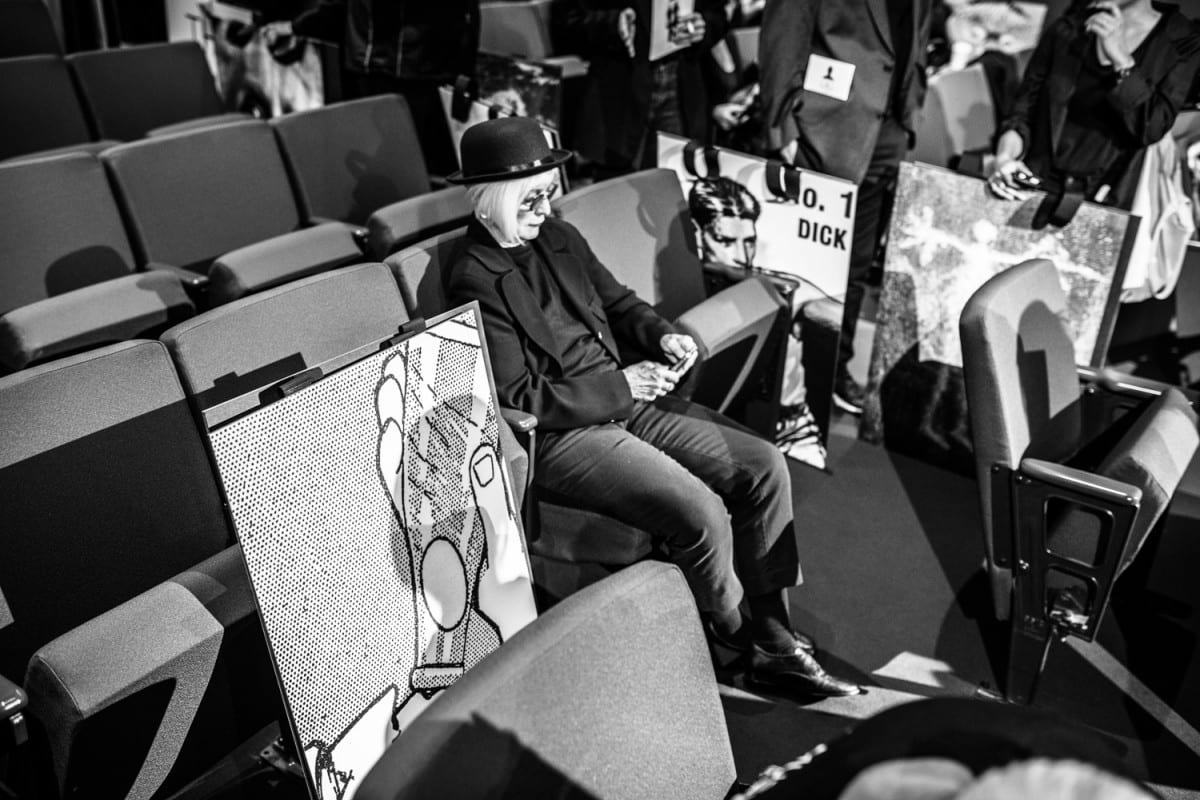 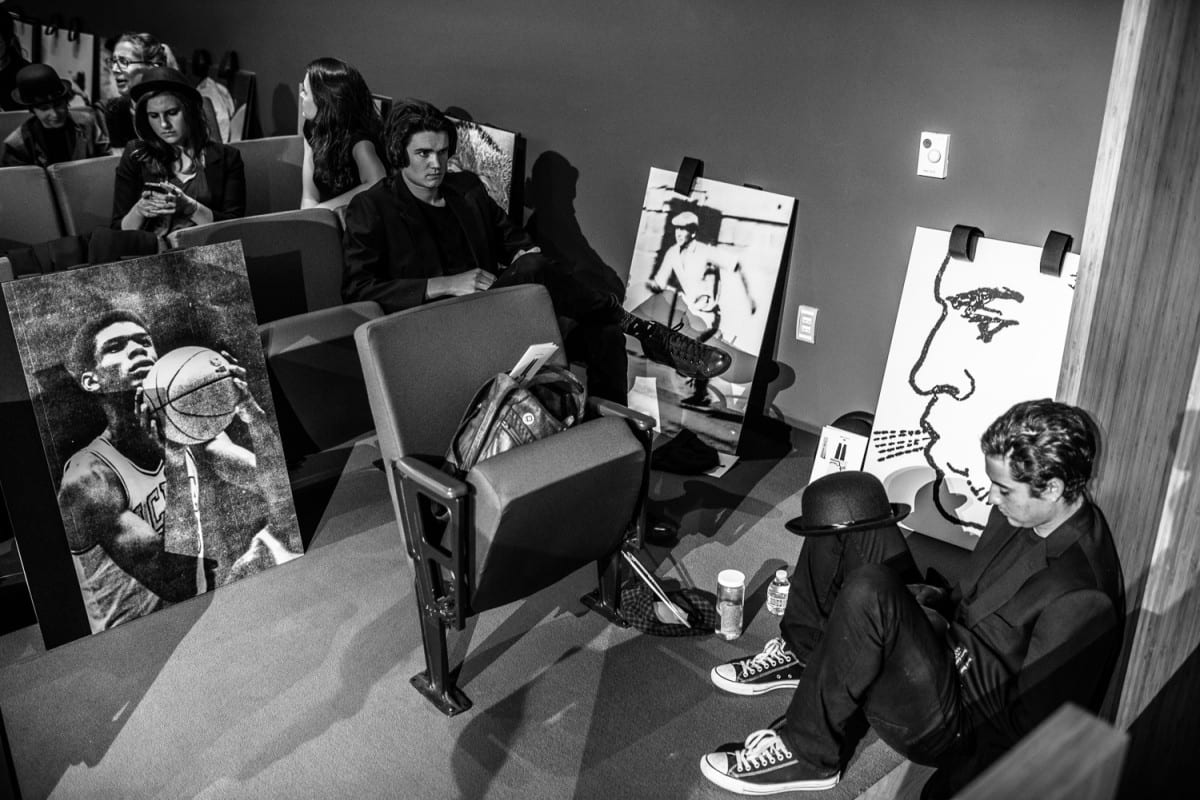 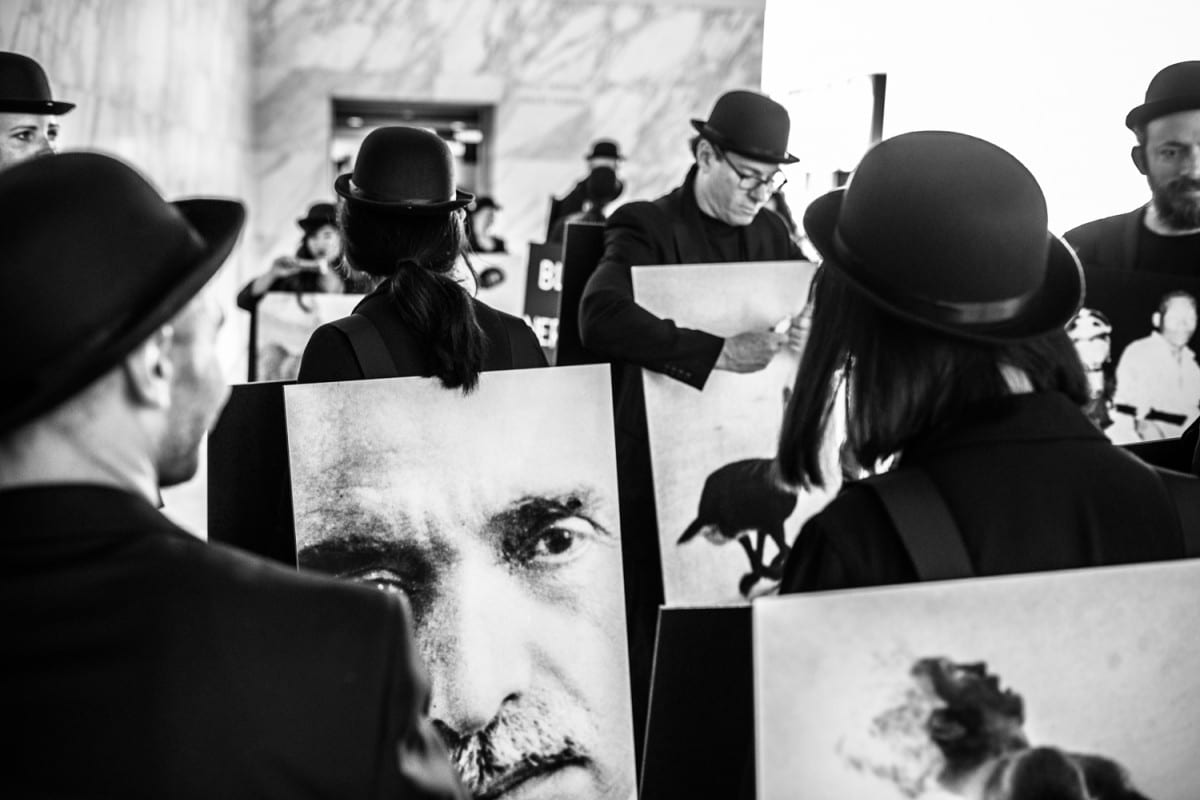 There was a great diversity of the walkers ranging in ages 10- 81.  I know that some of the participants were your family members.  What was it like to have such a range of ages participating in your piece?

As you point out, my uncle and aunt who live in Los Angeles (and who have been like second parents) both walked and this meant so much to me. And many people flew in from various parts of the country. My friend William Wylie, who invited me to work with him and his students (he teaches at the University of Virginia) for the walks in Wendover, Utah and Charlottesville, Virginia, came with his partner Grace Hale and three of their students (whose trip was funded by the University!). The ten year old you mentioned is Sebastian Zuba who also flew in from the east coast and walked with his mother Elizabeth. I was very touched that so many people took the time and devoted their energy and heart to the work.   In planning this piece I spent a lot of time thinking about how it would be seen by pedestrians and drivers but I’ve come to realize that the heart of this piece is the experience that each walker has. I’ve said many times that a transformation takes place between the months of preparation in the studio (when the piece feels as if its mine) and the day of the performance.  As soon as the walkers put on the sandwich boards, they take ownership of the piece. It belongs to them. Each walker had a unique experience and while they can recount it (many of them have, in written messages and also in phone conversations), nothing can really replace the immediacy and primacy of their walk. This is the most gratifying aspect of this work for me. It’s as if I’m simply a catalyst that sets a complicated chain of situations in motion.  Finally, I really wanted the demographic of the volunteers to reflect the nature of Los Angeles and for the most part I think we were able to do this. 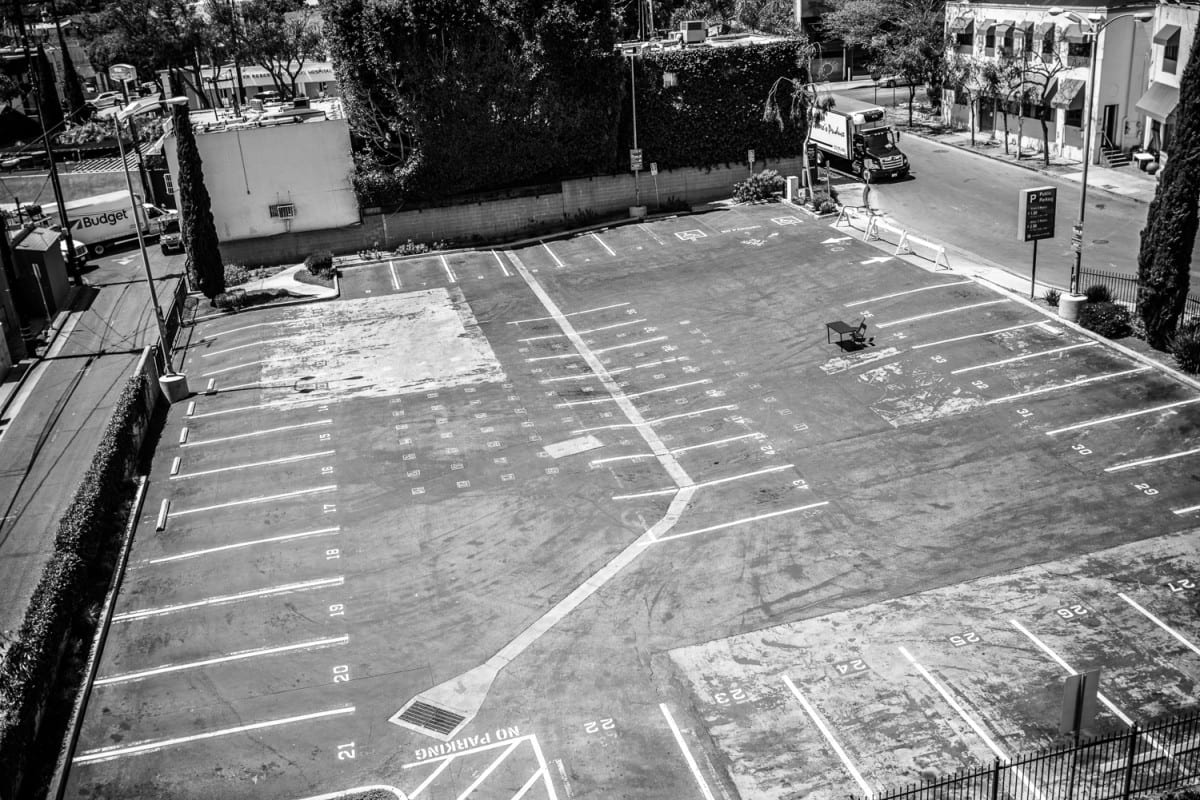 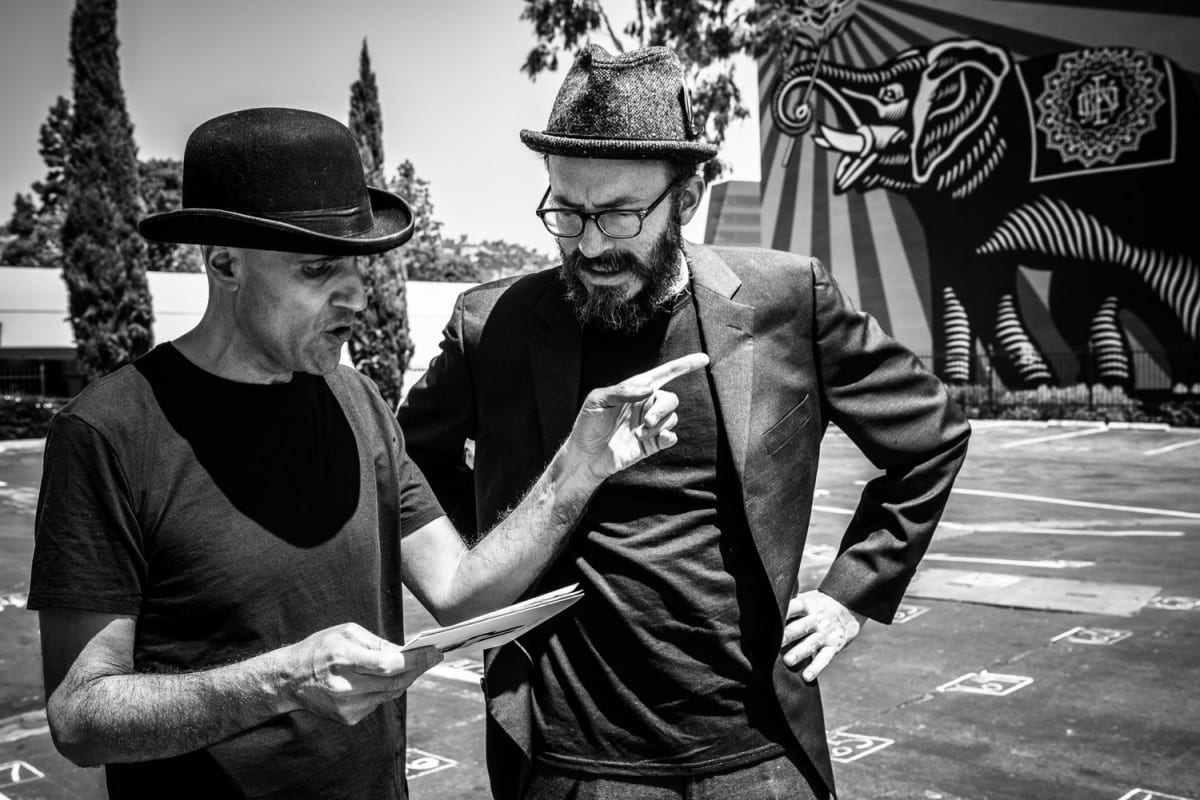 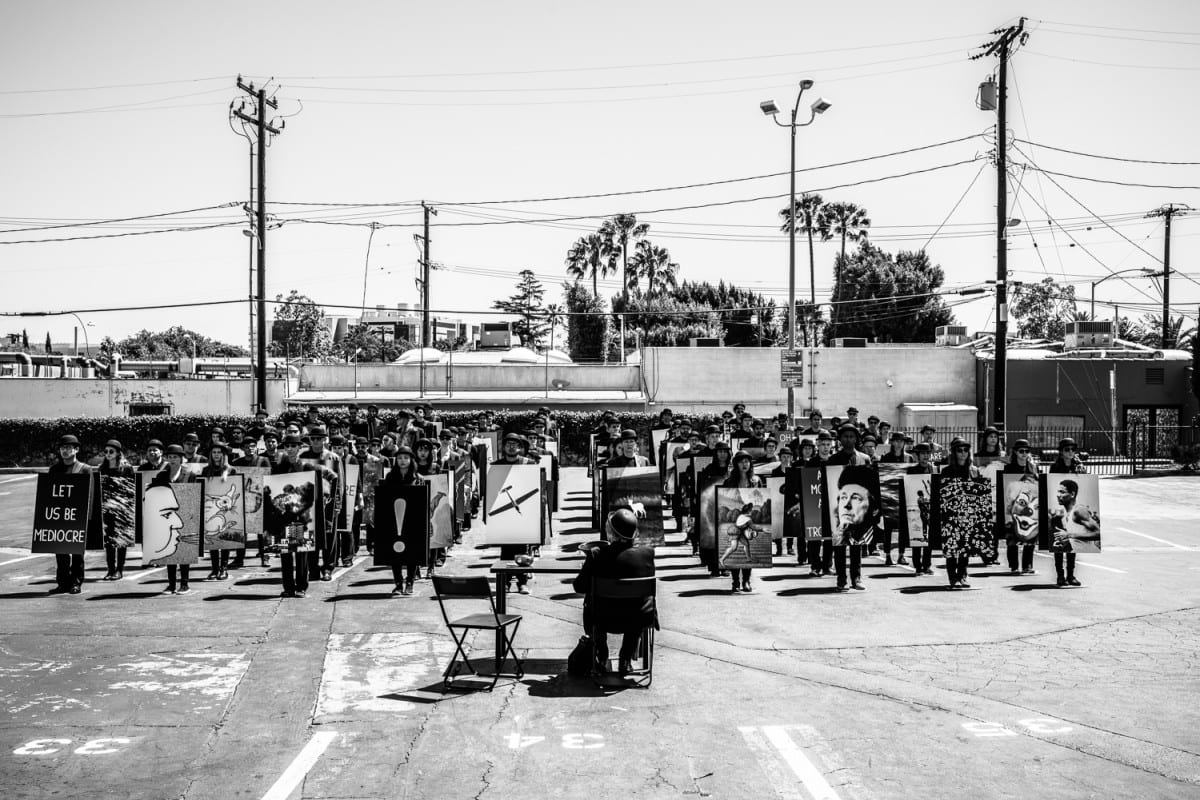 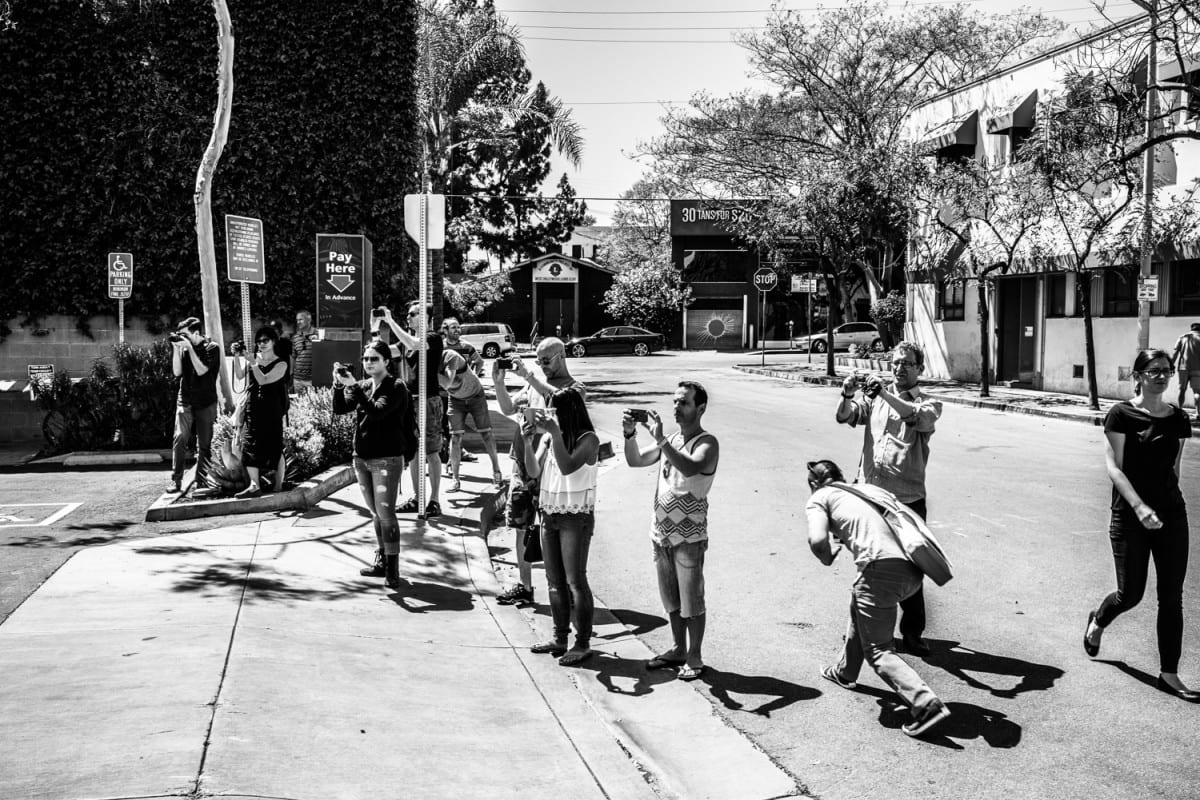 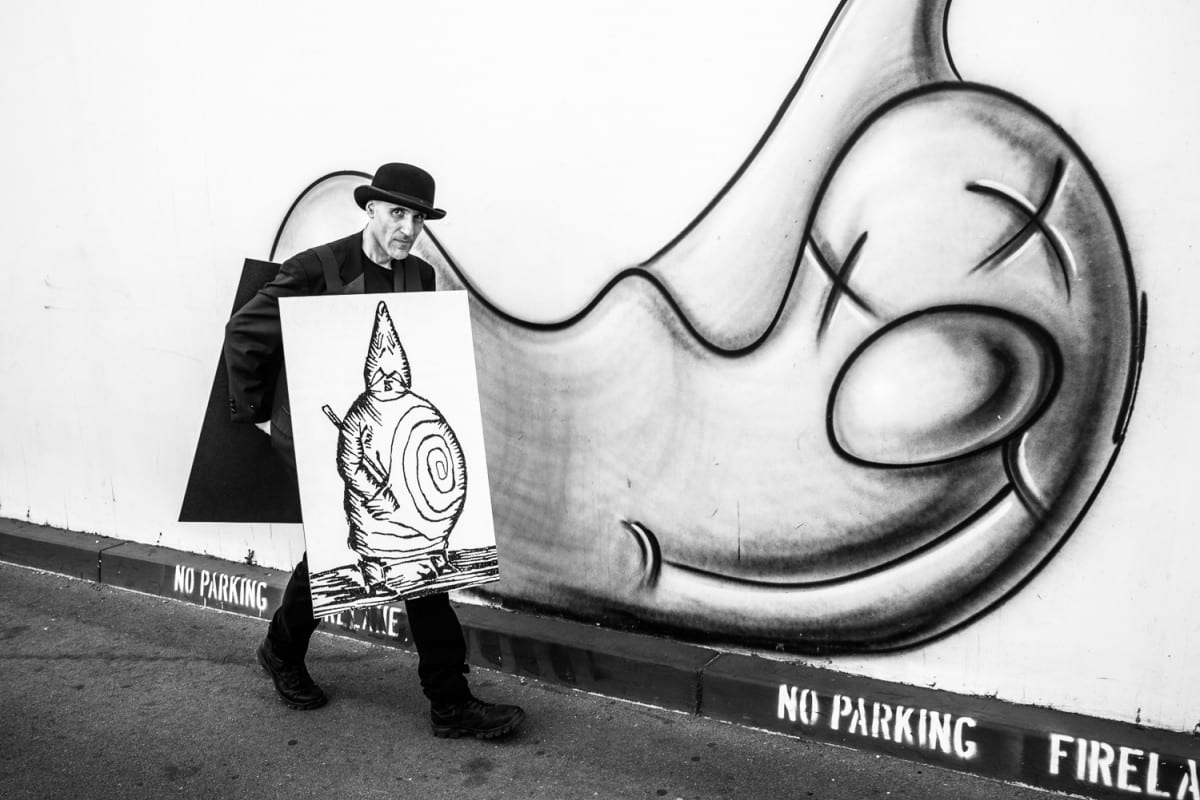 Did the walkers share their experiences with you? Did they offer any feedback as to what they felt was successful or could have been done better with the performance?

I’ve received a lot of emails and had numerous conversations with the people that walked. Its overwhelmingly positive, with many asking to walk again if I do another version somewhere else. I’ll be posting excerpts from many of these on the website.

What did you learn from this experience? What changes if any would you make to the performance for the future?

Each time I do this piece, I learn a lot. I’m not sure if I have any specific changes in mind yet for future versions but I know that the piece will evolve. (I’ve always loved, for example, the way that Bob Dylan reinvents his songs, to the point that sometimes even those who know his music well aren’t sure what they are listening to. Robert Frank also keeps finding new ways to reimagine his work.) So, if there are to be more walks, I’ll start from scratch in terms of imagery and texts and also in the way I think about the peculiarities of that particular landscape.

How do you hope 100 Walkers changed the city of West Hollywood?

I’m realistic enough to know that in the larger scheme of things this was a very small event. I also wouldn’t presume to think that West Hollywood needs changing or that I’d be the person to do that even if it did. However, I do hope that this work was a small gesture (in a era of turmoil, platitudes and promises of simple solutions to the most complicated problems) towards poetry and mystery and a celebration of the possibilities to be found in reverie and wonder.

Special thanks to Jared Clatworthy and Todd Super